It's nice to have another who understands.

I took the upper case lid off the C58 last night and sprayed some switch cleaner into the sliding switch a couple of times operating it full throw each time. Didn't do any harm and it has had some slight effect on the meter function. I now see and indication of drive on speech peaks when operating. Better but not a full fix. Problem is the signal is derived from the IF stages of the transceiver and would really need aligning to completely check for full functionality. I have all the information for alignment but unfortunately don't have the full range of test equipment to undertake the job anymore. The variable resistor that I said was also suspect is just used to set up the correct deflection of the meter for the battery check facility. I have decided to leave it as it is a minor discrepancy really and I know that it is radiating a Q5 signal in all modes, I can live with not seeing it on the meter. I could always take my SWR/Power Meter with me when using it portable, as an antenna alignment device that takes it's drive directly from the output stages of the transmitter so will definitely show the drive to a correctly matched antenna.

I hooked it up to my old 7/8ths 2m vertical whip last night and tested it with Kevin (M0XLT) over in Gargrave. We had a successful contact despite the antenna system at my end not being optimum, ( no ground plane for the antenna and just propped against the wall indoors) not ideal but better than the 6" rubber duck antenna for when you use it as a portable. Not fantastic copy but my one watt output made it over the drumlins. It will be different picture when operated from the top of a hill and with a better antenna system. I feel a session from the top of Weet's coming on.
Ian
Top

You've reminded me of the 'improved' aerial my dad fitted outside my attic window at the end of the war. It was a wooden socket on a bracket and took a piece of copper cable core about a foot long which was fanned out like a brush. It certainly worked better than the long copper wire we had before that.
Stanley Challenger Graham
Stanley's View
scg1936 at talktalk.net

Stanley wrote: ↑08 Sep 2021, 02:50 You've reminded me of the 'improved' aerial my dad fitted outside my attic window at the end of the war. It was a wooden socket on a bracket and took a piece of copper cable core about a foot long which was fanned out like a brush. It certainly worked better than the long copper wire we had before that.

With any end fed wire the radiation pattern fans out equally over the length of the wire like a bubble at each side. The wire is effectively a simple directional design so if it was orientated North to South the radiation pattern and also it's best reception would be from the East or West. Conversely if it was laid out East to West it best reception would be from the North or South. Patterns get a bit more complicated if you zig zag the wire or erect it in V formation etc.

I assume the wire brush antenna you describe was mounted vertically with the fanned out wires horizontal? If that was the case the design would be more omnidirectional so would be a little better for all round reception on a domestic or broadcast receiver. If you want true omnidirectional you need a vertical antenna and to complement it a ground plane counterpoise for it to balance against. This can take the form of an earth mat or random length radials laid out beneath the vertical component.

If you take a walk along the Croft you will see my tri-band vertical antenna for 6m / 2m and 70cm. That will have various coils within the outer casing of the vertical component, (the white stick bit) and you will see that it has three different length counterpoise rods at the base cut to a length that is resonant on each band that the antenna is designed to operate on. The longest (6m counterpoise) has a coil built in to get a derivative of the correct length. Each of the counterpoise rods can be adjusted slightly in length for fine adjustment of the antenna.
Ian
Top

The wires were fanned out in all directions Ian and it looked like a very large shaving brush but more semi-circular.
Stanley Challenger Graham
Stanley's View
scg1936 at talktalk.net

Some kind of omni design no doubt the radiated leads would give more all round coverage than a single wire for the reasons posted earlier. 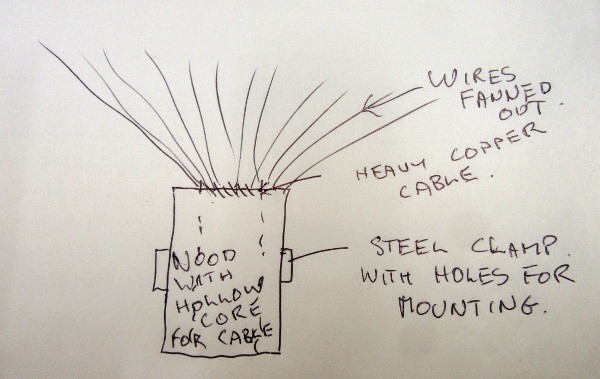 That would do it Stanley, it's a basic omnidirectional design.
Ian
Top

I think I had mentioned before that the 40 year old 25W Linear Amplifier for my Standard multi-mode transceiver had developed a fault. Reports say that in use the signal is distorted. I built the dummy load a while ago so that I could have a go at the repair on this bit of kit. I set about it yesterday. Here is the set up for test with the lid off the amplifier. 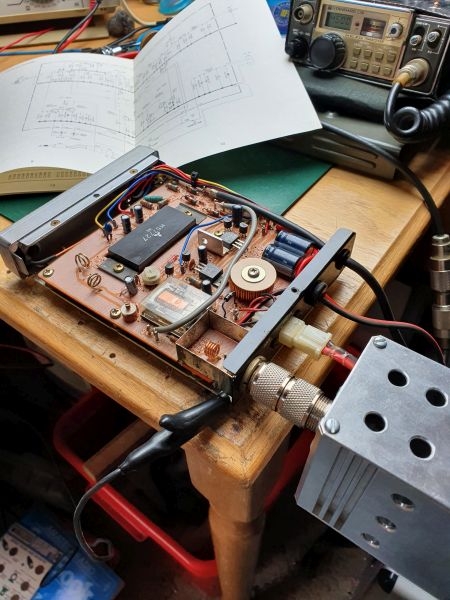 I have the dummy load connected directly to the output of the amplifier. This will provide both a 50 ohm load to the amplifier and absorb the RF generated by the device without radiating a signal. The negative of my bench meter is connected to chassis and I am powering the amplifier directly from my regulated bench supply. The C58 transceiver is providing the 1W of RF drive into the amplifier. 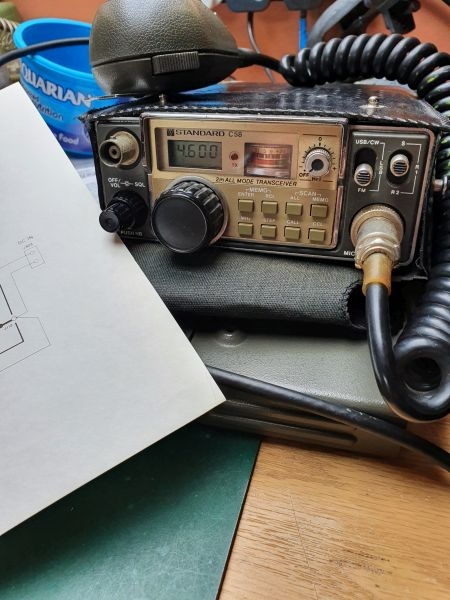 I have it set to 144.660 MHz which is in the all modes portion of the band. I am using FM modulation so I get a full carrier drive and so positive and constant switching for the amplifier. 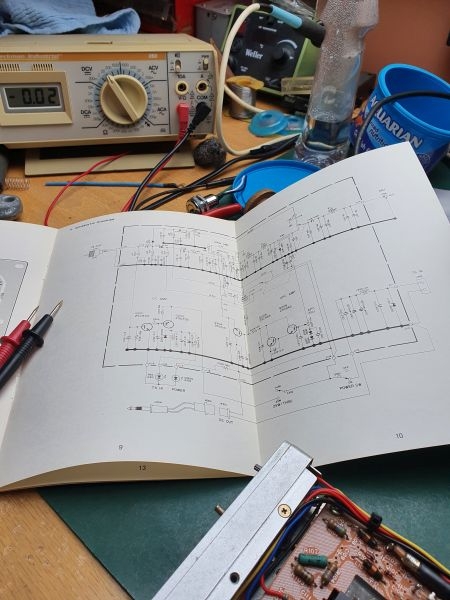 The manual has a full schematic circuit diagram. 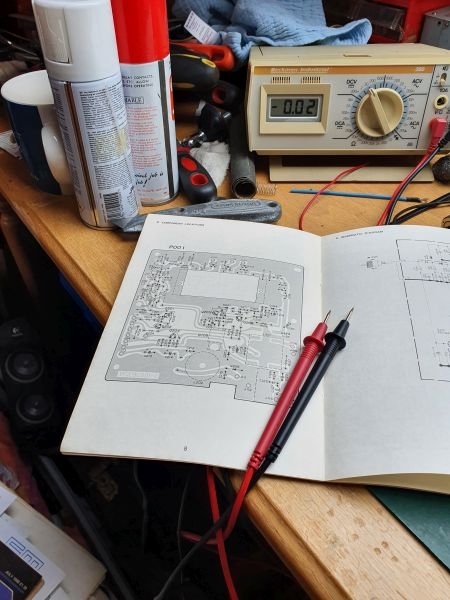 also a PCB/parts layout diagram. My Beckman DV meter in the background at the ready. 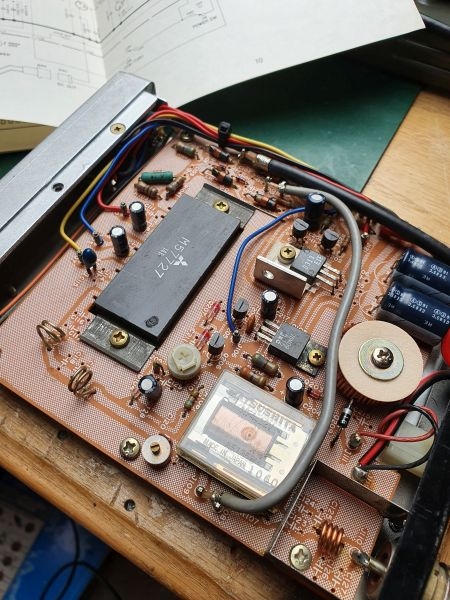 Here is a close up of the PCB. You can see that it consists of a single LSI (Large Scale Integration) IC which is a complete two stage RF amplifier IC manufactured by Mitsubishi. All the other components are standard passive as this unit pre-dates the advent of surface mount technology.

I have checked both the diode switching circuit on the input side and the relay switching on the power output side. Both are functioning perfectly. I checked all the resistors in circuit and they are all within tolerance of their nominal values, non high or open circuit. All the diodes are functional as well, all checked, resistance one way, open the other which is the characteristic of diodes. All the voltages are correct in both the receive and transmit modes. Th electrolytic capacitors can be suspect in equipment of this age but I cannot see any tell tale signs of failure. There are only 8 electrolytic's anyway. The two large ones are the smoothing for the DC supply, all the others are doing minimal decoupling roles in the design.

One thing I have noticed though is that the main IC has a small round blemish on the encapsulation of the device. You can see this quite clearly on the last image. This could be indicative of the problem. It could have developed an internal fault and overheated at some time. I can't see anything else wrong with the circuit, the APC (Automatic Power Control) feedback loop in the amplifier seems to be working. The only other bits in the amplifier are low pass filters on the input and output which are just simple standard capacitor / inductor design. These would not contribute to a distortion fault though.

My money is on the main IC which after a quick Google search is still available from a few different Ebay suppliers (all based in China). Just over £30.00 or thereabouts. Six to eight weeks on the lead time for delivery. I can't replace this little linear amplifier for a comparable model for less that £150 - £200 so a £30 IC looks very attractive. I will probably order and put my theory to the test.
Ian
Top

£30 is a reasonable 'gamble' to take. There's always the potential to sell it on if it's not that.

The tv I replaced the power board in is still OK (you helped me identify the issue). The board I bought was a used item on Fleabay, straightforward swap out with plugs and four screws.
Kev

This is a bit more involved Kev. I doesn't have many leads but as the main power stage in the amplifier it has specific heat sinking requirements. You have to get that right or it will fry itself. It's built with overkill though as the IC is capable of delivering 40W of RF drive but is only used at 25W.

Quite a bit of stripping down as well to get at the bottom of the board for the mounting.
Ian
Top

Good job you aren't relying on me for help! This all above my pay grade!
Stanley Challenger Graham
Stanley's View
scg1936 at talktalk.net