As I was writing on OG at about 11.45 today I heard a prop aircraft flying over slowly. Looked out and wasn't sure of ID so grabbed a pair of bins. A Catalina! Going south-west, presumably doing a display somewhere. Lovely!

Later...looked up Catalina PBY-5A and found that's it's appearing at the Torbay Air Show, Paignton, Devon, 3-4 June 2017.
Nullius in verba: On the word of no one (Motto of the Royal Society)
Top

The Catalina and Sunderland flying boats were invisible assets during the war because they spent all their time out at sea doing anti-submarine and rescue work. I have never seen either of them.....
Stanley Challenger Graham
Stanley's View
scg1936 at talktalk.net

Our holiday last week was at Praa Sands, Cornwall. In 2013 a memorial was erected to the crew of a Sunderland that crashed on the beach in WW2 after being attacked by 8 German fighters.... LINK
Nullius in verba: On the word of no one (Motto of the Royal Society)
Top

They would have been easy prey, slow and only lightly armed. Poor buggers.....
Stanley Challenger Graham
Stanley's View
scg1936 at talktalk.net

Not such easy prey as you might think. Wikipedia says: "Although the .303 guns lacked range and hitting power, the Sunderland had a considerable number of them and it was a well-built machine that was hard to destroy. On 3 April 1940, a Sunderland operating off Norway was attacked by six German Junkers Ju 88C fighters. It shot one down, damaged another enough to send it off to a forced landing and drove off the rest. The Germans are reputed to have nicknamed the Sunderland the Fliegendes Stachelschwein ("Flying Porcupine") due to its defensive fire power." LINK
Nullius in verba: On the word of no one (Motto of the Royal Society)
Top

The Red Arrows flew very low over my house yesterday, and switched the white smoke on just for me - I told myself.

Now it appears that all did not go exactly to plan. . .Near miss
Born to be mild. . .
Top

It makes you wonder how long these ancient planes can be maintained .......
Stanley Challenger Graham
Stanley's View
scg1936 at talktalk.net

Indefinitely, as long as there are parts available or the skills to make them, according to the flight maintenance engineers at Coningsby where the BBMF is based. They have original engineers drawings for the aircraft and at the end of the day they are only machines. The Spitfire recovered from the mud at Dunkirk referred to in another thread only had about 15% of the airframe and not much else left. Many warbird recoveries are in similar condition but can be put back to air worthiness where there is a will, and a lot of money.
Ian
Top

We're getting close to Trigger's Broom

Like Eric Winkle Brown, another pilot who learned to fly before joining the RAF and survived because of being experienced. He's described as being very lucky - but another view is he and Winkle Brown `made their own luck'.
`James 'Ginger' Lacey: Battle of Britain pilot remembered' LINK
Nullius in verba: On the word of no one (Motto of the Royal Society)
Top

I've always thought that you make a lot of what people call 'luck'. With machines it's called maintenance and preparation.
Stanley Challenger Graham
Stanley's View
scg1936 at talktalk.net

Some great old B&W photos here of test flights of experimental aircraft....
`US space pioneers' hair-raising test flights' LINK
Nullius in verba: On the word of no one (Motto of the Royal Society)
Top

It takes special men to do things like that, not my cup of tea!
Stanley Challenger Graham
Stanley's View
scg1936 at talktalk.net

I watched 'Memphis Belle' last night - not my usual fare, but having been to the Imperial War museum at Duxford the previous day, and seen a similar aeroplane close up. I felt obliged to.

Good day out - especially as it was with some of my family.

I didn't realise you can have a half hour flight in a Spitfire. Just a small matter of £3000. I took a video of the start of a flight, but have been unable to cut out me swearing at the camera at the start, so can't publish it yet.

We spoke to the next punter who was waiting for his turn. he had the trip as a 40th birthday present. He had been told his flight was in a Dragon Rapide, and didn't know till he went to the reception that it was in fact booked for the Spitfire. Rarely seen a grown man so excited.

'Worth a look' as they used to say in the Customs.

Bob told me that Memphis Belle was a pretty accurate film...... He would know, it was exactly his era.
Stanley Challenger Graham
Stanley's View
scg1936 at talktalk.net

Some years ago Tripps alerted me to an offer in a newspaper and sent me the coupon from the paper. It was for a large print showing an image of the RAF Memorial Flight over the white cliffs of Dover, available for a mere £5 plus the coupon. I sent the coupon and cheque and duly received a long cardboard tube bearing the said print. We had it framed and presented it to my father to remind him of his days in the RAF in WW2. He was delighted with the print hanging on his wall and it followed him to a smaller house and then to his care home flat. Everyone who saw the print was impressed, especially because it had many signatures of RAF men on its border. After his death we kept the print but after moving to our new house recently we don't have the wall space for such a large frame. I'd considered giving it to the local RAF Association but then an alternative arose. We met a man who builds models of Spitfires (yes, only Spitfires!) and found him very enthusiastic about aircraft. A member of his family had promised to treat him by paying for a flight in a Spitfire over the white cliffs of Dover but now it won't happen due to that person running into financial trouble. At this stage he didn't know about the print so I showed it to him and asked if he would take it as a gift. He immediately said Yes and went away a very happy man! Thank you, Tripps, you made my father very happy and now you've done again it for another aeroplane enthusiast!

No - you,ve done it, and I fully approve. Good man.

Thank you kind sir! Aren't we polite to each other? But then as Peter Hennessy said on the BH programme, "What we need at the moment is more civility". Well, we're doing our bit!

I always say that what we need in this world is more 'nice'. OG has it in spades!
Stanley Challenger Graham
Stanley's View
scg1936 at talktalk.net

`AG600 Kunlong, world's largest amphibious plane, in maiden China flight' LINK
Nullius in verba: On the word of no one (Motto of the Royal Society)
Top

I've always had a soft spot for seaplanes and amphibians. I once spent a few days on Catalina Island off LA and as late as 1980 they still had a regular seaplane service. 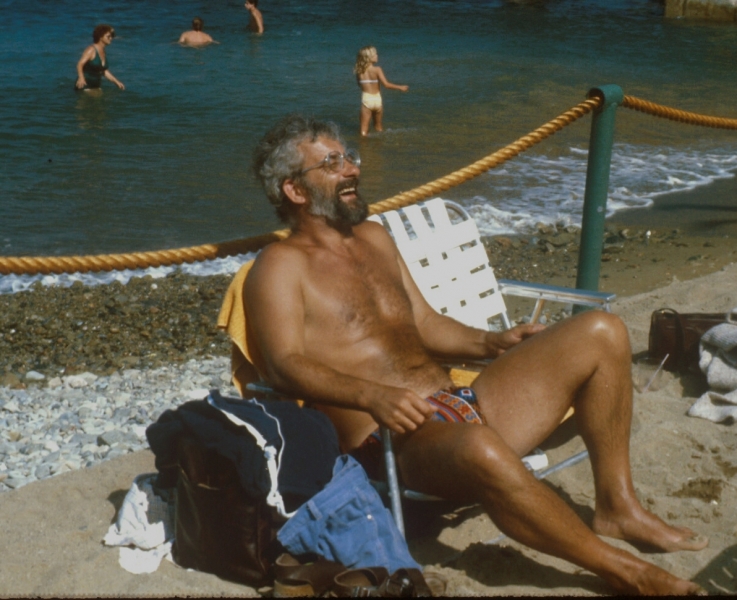 Nothing to do with the seaplane but evidence I was there.....
Stanley Challenger Graham
Stanley's View
scg1936 at talktalk.net

Have a look at this photo from 1941, WW2, it has some unique features. Yes, it's a Hawker Hurricane being serviced, nothing unusual about that; but then you notice that it's being serviced by an all-woman team which is less usual. There's still more about the photo - it's not an RAF plane and it's being serviced by WRENs, not by WAAFs. This is a Hurricane of 759 squadron and the work is taking place at the Royal Naval Air Station in Yeovilton, Somerset. Unfortunately in 1941 the aircraft and pilots of 759 squadron often didn't last long - many crashed while pilots were training. The squadron started the war flying Skuas and I suspect that 1941 was when they switched to Hurricanes and had to re-train. (Photo from FAA Museum.)

I like that image. The Spitfires won the glamour competition but the Hawker Hurricane was the workhorse and because of its construction was more easily repaired than the Spits and got back in the air. I also like the fact it's work stained...... Another fact that's almost never mentioned is that because the undercarriage folded inwards it had a wider wheelbase while taxiing and was more stable. The Spitfire's were the opposite way round and not as stable when landing or taking off.
Stanley Challenger Graham
Stanley's View
scg1936 at talktalk.net