Give Us This Day Our Daily Bread

All this talk about breads is making me needy!
Stanley Challenger Graham
Stanley's View
scg1936 at talktalk.net

Finally tried the breadmaker again. Followed the recipe the previous owner had encapsulated and left in it. She said it worked fine. The electricity tripped just as it had about 45 minutes to go - and of course there's no way to get to the exact same point in the cycle. I didn't panic, and took the container from the machine and put it in the oven.
I guessed the temperature, and time.

Apart from it looking like a big square Hollands Meat and Potato pie - I think I've got away with it.

bread2.jpeg
You do not have the required permissions to view the files attached to this post.
Born to be mild. . .
Top

Looks like the cycle didn't quite get to the end of the second rise. I take it the full cycle was somewhere around 2H 50m or just over 3H?

Here is my offering baked today, less than an hours prep and 30mins in the oven: 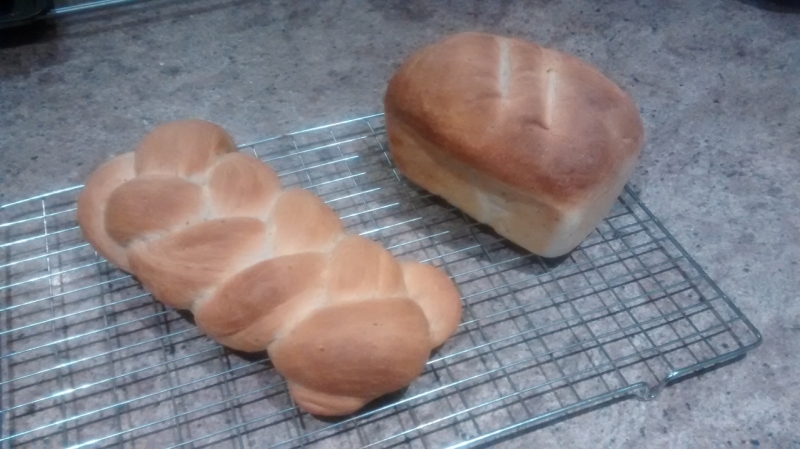 They are basic recipe with added Chia seeds.
Ian
Top

Nice breads all round!
I’ve just made a batch of Pumpkin and Toasted Almond Spiced Muffins. ( it is Friday and I was looking for a way to use the leftover Japanese Pumpkin in the fridge). I threw some Cinnamon, Cloves and Cardamom in. Yummy.
Top

I'm trying a Nigella variant on a white loaf. Uses quite a bit more liquid, (mix of hot/cold water, milk and butter) than normal and produces a slacker dough. 30 seconds total kneading in 3 x 10 second sessions 10 minutes apart. Just waiting on it's first rise at the moment. It will be interesting to see how the gluten develops.
Ian
Top

Here's the result after an hours rise, knock back and a further half hour in the tin then 35 mins in the oven. 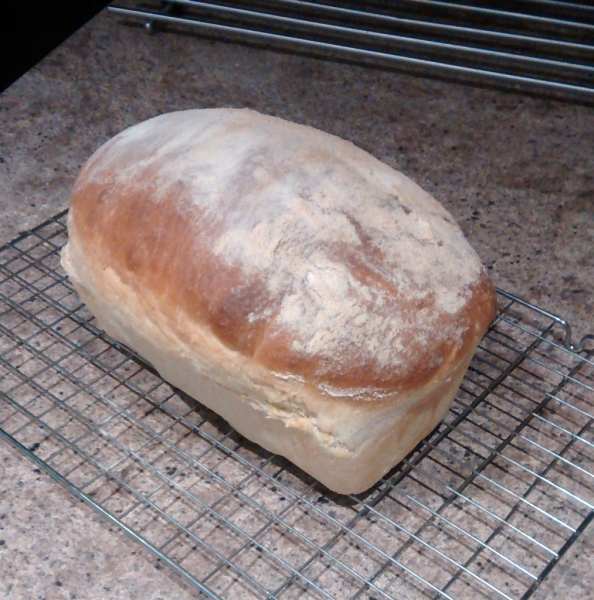 That looks good. I've always used a slack dough, I found it makes it easier with the dough hooks in the mixer. It almost pours into the tin

One of my Christmas presents was a Banneton so I thought I would give it an airing with sourdough loaf. My starter looked to be alive and in good order so I mixed the dough yesterday and set it to rise. It's a long rise when you just use a natural starter so I left it overnight. Checking it this morning it was still fairly flat with hardly any rise at all! I thought of a rescue plan which would either make it sink or swim.

I got the mixer out with the dough hook and then knocked back what little rise there was in the dough then cut it up into small chunks. I got a sachet of instant yeast and mixed it with a little warm water to dissolve the grains. I tipped the whole lot into the mixer then left it mixing for about 5 minutes. I ended up with a bit looser dough but tipped it out and gave it a hand kneading for a few minutes to firm it up. I floured up my Banneton and after balling the dough put it in the basket and then into a large plastic bag to see if that improved the rise. 90 minutes later it was up to the top of the basket so I floured a baking tray up, tipped it out gave the top a couple of light slashes and shoved it in a hot oven for half an hour. Here is the result. 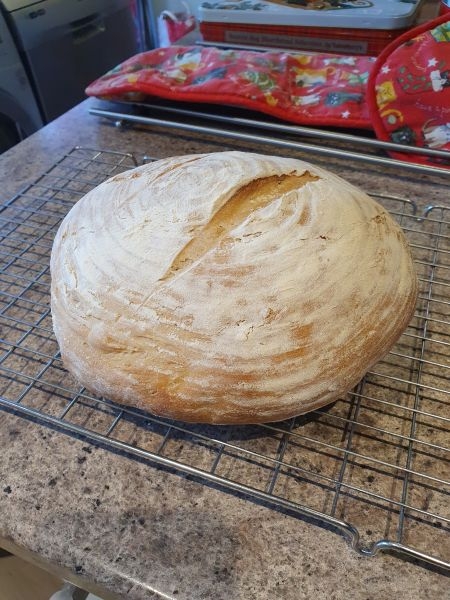 Looks like a successful rescue, proof will be in the eating.

I think I will dump the remainder of my starter and start again. It's been on the go since about last August. I'll get some green grapes the next time I see some.

My starter was definitely dead so I dumped it and started another batch last week. Wednesday I think it was. 250g strong flour, 250ml tepid water and 6 or 7 green grapes chopped up to start the fermentation. I put it in a plastic sweet box that we had from Christmas and left it to fester until Sunday. It was certainly active by then and ready for another feed. I discarded half of the mixture and then fed it with 100g of flour and 100ml of water and gave it a stir, popped the lid back on and left it overnight until yesterday when it was ready for use. I took 250ml out for a batch of scones and another 250ml for a loaf which I mixed up firsts and then set aside for its first rise. I left it all day until evening and then knocked it back and put it in the floured up Banneton for its second rise overnight. I made a dozen scones with the other batch of starter, they turned out well.

The dough had risen sufficiently overnight and passed the push and spring back test to say it was ready for the oven. Here is where I hit a problem. I couldn't release it from the Banneton and keep its shape and once scraped out it looked like the dough was actually a bit "slack". I knocked it back again and gave it a good kneading on a bed of strong flour to firm it up some more. When I balled it up I liberally coated it with flour and semolina mix along with a re-flouring of the Banneton. It's back now in it's plastic bag hopefully on a second rise.

I had decanted my remaining starter into it's Kilner jar but noticed that it had gone flat. I can only put this down to temperature as it has been well fed and should still be active. I have given it some more grapes to see if I can pep it up a bit and put it back in the plastic box and it's thinking about whether to live or die in the living room. I will have a look tonight to see if it has done the trick and offer it a bit more flour if it's still flagging. I should know by this afternoon if the loaf is going to rise or remain a brick.
Ian
Top

Half brick like actually, good crust as I put a water bath in the oven with it. Tangy enough and the crumb shows some activity of rising but not very much. Fine if you have it with soup or something else moist, otherwise it is considered a fail.

I'm fairly certain this is down to the variation in ambient temperature at this time of the year, cold blasts when the back door is opened etc. Anyway, bread making is a chemistry experiment in many ways and this one definitely went wrong.

I am in the process of making a bog standard hand baked 2lb loaf, cant go far wrong with that one.

I have made the executive decision to dump my sourdough starter until the ambient temperature increases a bit. My newly formed one has not revived despite letting it rest in the living room. I will start another one the other side of spring.

Our local artisan bakers are shut for a few days as they have a Covid issue at the moment I believe. To this end and as we have just finished the last Chia of theirs that we had on the go, I have tried a variant on the Nigella loaf. In previous Chia efforts I have always added the seeds directly to the dry ingredients and relied on the liquid added during production to do the bit of expansion on the seeds.

The Nigella recipe uses a mixture of hot and cold water and milk with added butter for the liquid content of the dough. So what I did this time was to add the Chia to the boiled water component of the liquid and let the magic begin there before adding the other portions to make up the required moisture content of the dough. Doesn't sound much of a tweak but I think it does make quite a difference to the dough.

Here it is after it's three 10 second kneadings over 30 mins and back in the bowl for proving. 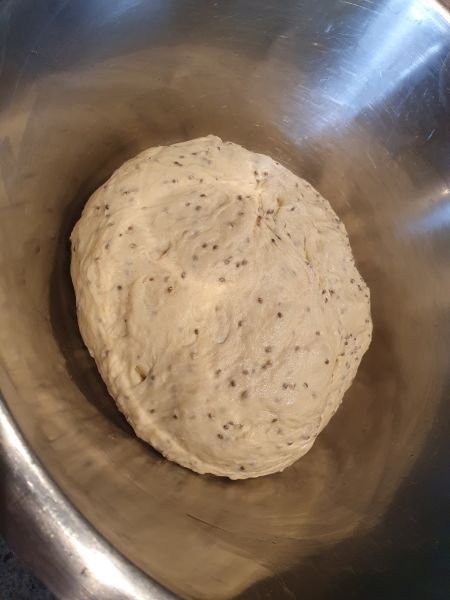 Here after just over an hour proving, I think this is going to be a good one! 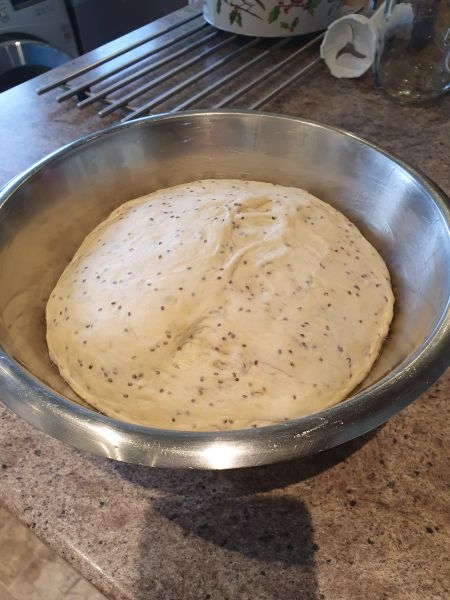 Knocked back and ready for folding for the tin. You can see the swollen Chia seeds throughout the dough. 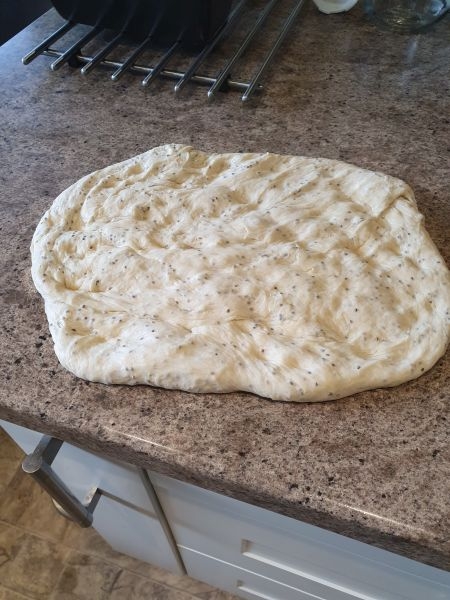 It needs another hour or so to rise in the tin then I will bake it and put another post up later with the final result.

Later edit after 40 mins in the oven: 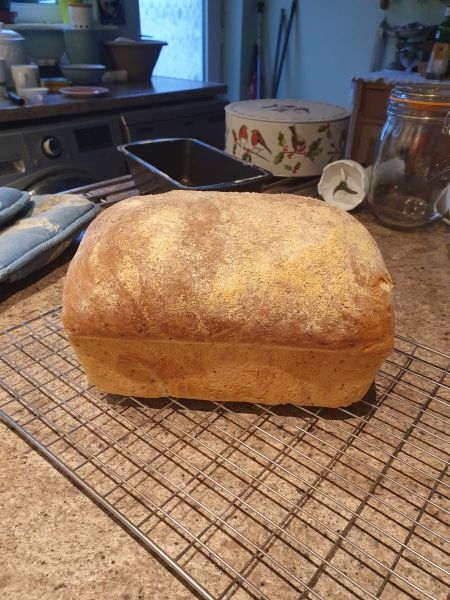