I created this new thread for anyone who likes to bake.

I will start it off with this offering of a sourdough cake. It has been 10 days in the making but is rather nice.

Sourdough recipes require a starter, mine came via my daughter who in turn had received hers from a friend. Sourdough starters are more often used in bread baking but the principal for cake making is similar although with different ingredients and method. The cake starter is passed on from the batch of ingredients produced at day 9 of the process of creating the mixture.

The basic ingredients up until the last stage is only a mix of flour, milk and sugar which has been allowed to mature in the atmosphere which introduces natural airborne yeast spores and causes the mixture to mildly ferment.

Here is my starter as passed to me by my daughter, there is approximately 250ml of mixture. 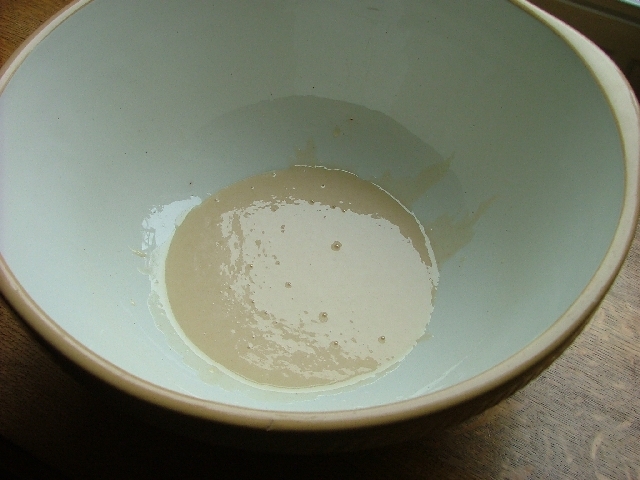 If you look carefully you can see that the mixture is bubbling slightly. The mixture is placed in a large mixing bowl and is left on the worktop covered with a clean tea towel. This is day one of the 10 day process to create the final mixture for baking.

By day two the mixture should have expanded with the fermentation process, all that needs to be done is to stir the mixture.

Day three is another stirring day and you can now notice that the mixture has a slight aroma similar to a good yoghurt.

Days five, six, seven and eight are all stirring days.

Day nine is when you feed the mixture again with more flour milk and sugar. By this time you will have about 1000g of mixture. This is when you divide it into four and can pass on the next batch of starters to friends. Each will have around 250ml of mixture that is now 9 days old and should still be bubbling with the ongoing fermentation that is in progress. I gave one along with a copy of the instructions to our friend Kath who is an avid cook and baker and has wanted to try a sourdough recipe for some time. I passed the other to our Australian Barlicker's Hillary and Keith who said that the process sounded a bit like witchcraft to him but they would give it whirl. The other batch was retained for Sally to have a go with her end ingredients. The last quarter goes on to make the final mixture at day10.

Day ten is when you create the final mix by adding more flour, milk, sugar, eggs, vanilla essence, cinnamon, baking powder, cooking oil and whatever other ingredients you want to add to the basic cake mixture. I chose raisins for mine but you can add any type of fruit or nuts or whatever takes your fancy. After final mixing, you tip the whole lot into a baking tray and top with melted butter and sprinkle with brown sugar, then bake for 40-45 minutes at gas mark 4. I used unrefined cane sugar on mine. This is the cake as it came out of the oven. 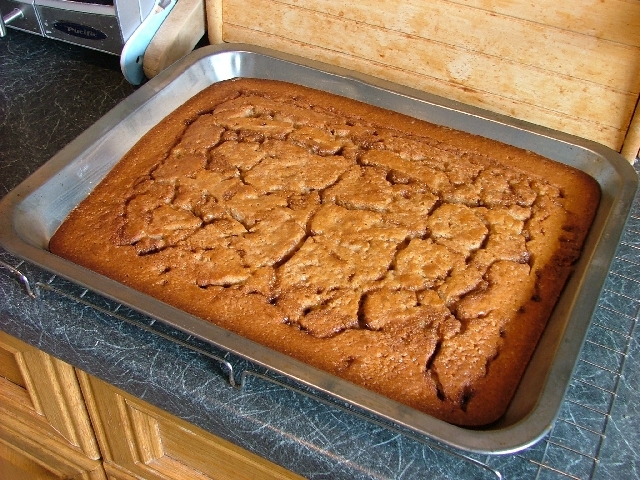 After allowing to cool, the cake can be sliced which gives us the end result ready for consumption below. The cake can be frozen if required. 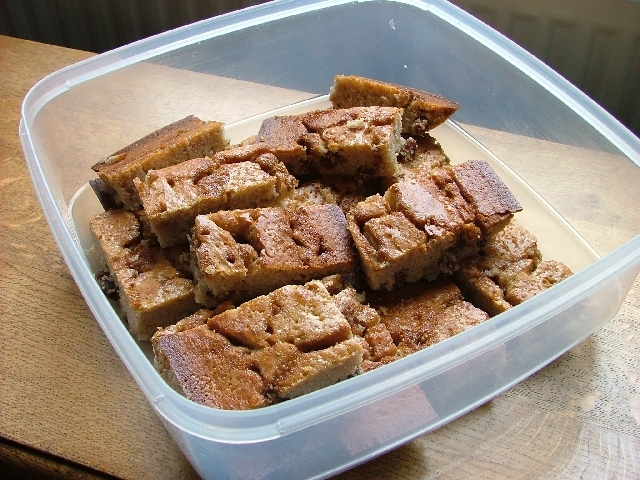 The starter mixture cannot be kept in the fridge or frozen as this will kill the bacteria causing the fermentation.

Now the proof of the pudding as they say is in the eating, a very nice bit of fruit cake in this case, moist and sweet with a slightly tangy taste with a hint of vanilla and cinnamon. The instructions suggest serving with cream or ice cream but it does stand on it's own without further embellishment although will probably try the variations.

I have attached the recipe and instructions as a word doc and a PDF.

Sourdough Cake.pdf
Sourdough Cake.doc
Another batch is in the growing, any locals interested in inheriting a starter in about 10 days shout now.
You do not have the required permissions to view the files attached to this post.
Ian
Top

The second batch is coming up for division this weekend. I have noticed that this mixture has been a lot more active between the stirrings, almost halfway up the bowl before knocking back. It will be interesting to see how this affects the end product. Most of the ingredients are rough measured when feeding the mixture so each is bound to be a unique creation.

We are going to make two batches from this mix, one with my fruit mix and the other with Sally's preference. I think she is going to try Cranberries and Walnuts. This will leave two starters for anyone that wants them.

I will probably freeze some of this batch as we are producing double the amount.
Ian
Top

Amazed to find that it was eight years since I made the last sourdough cake. That was in our old kitchen and the roasting tray I used is long gone. I think it went in a clear-out when we changed to the storage drawers in the island in the new kitchen.

I have recently been revisiting various sourdough recipes so this is the latest batch of cake. Made i two smaller trays. I sliced them both up then put one trays worth into the freezer. Raisins and sultanas in this batch. 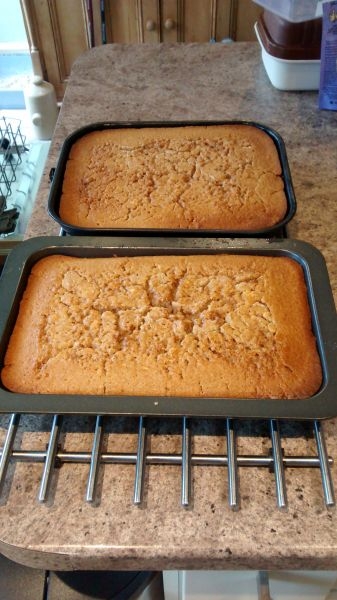