The boot repair specialists have a 4 to 5 month turnaround with no sign of the business slackening off. I'd need a new pair of boots before I could do that!
https://www.wunderground.com/personal-w ... UNITEDK203
Top

Have a look at Altberg, bit of trek up to Richmond but a nice run. I have no idea about their pricing but I know they offer the service. I wonder also if the cobblers in Barlick could do anything for you?
Ian
Top

It was our Jacks Birthday yesterday, we normally have a family get together but with Sally still testing positive for covid that was off the cards. Jack came up after his gym session and we went for a walk. Just one of our normal circulars. Out via the stables up to Cow Pasture, Hollins, out onto Dark Hill and up onto Edge Lane. The stile at Dark Hill has not been repaired yet on the town side. We returned via Edge Lane and then down Esp Lane, Town Head and home. It was warm and only required a T shirt. I had a nice glass of Aldi's fruit infused Cider to cool down in the back yard sun trap. 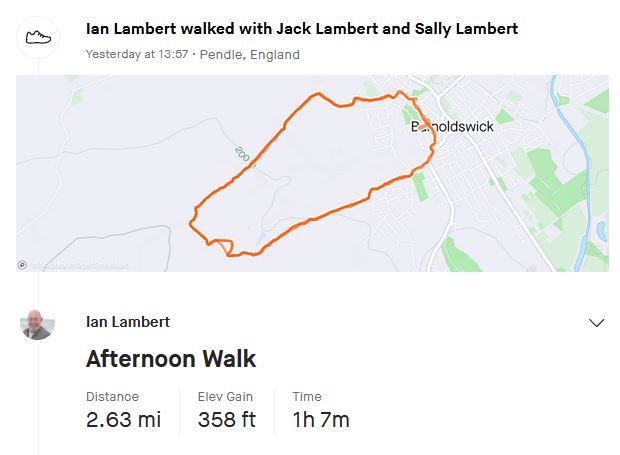 Shorts a T shirt walk yesterday. I popped my boots on because they are better for walking in. Out via the Parrock and then up Westgate to Town Head and then on to Esp lane. New fence has gone in by the old farm where they grubbed the hedge out and removed the rather nice tree at the bottom of the field! Up Esp lane to the stile above Springs, I was going to go up Edge Lane but it was a tad warm for that. Through the stile and down the hill, there is a new way mark sign on the fence to indicate a router change at the bottom of the hill. The exit stile used to be at the back side of the garage but has now been moved about 30 metres to the right, into the corner of the field. Here is the new stile, the path from the top is now diagonal rather than straight down the field. 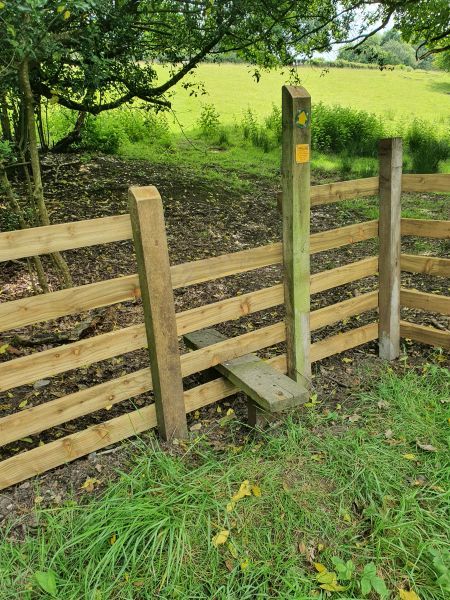 A proper job done by Tom and the footpath team, way marked on the approach to indicate the change.

Through the yard and over the stile to the path by the beck through to Hollins Lane. Another change here about half way through the field. A new dividing fence, gate and stile have been put in, perhaps a change of ownership for a bit of the field, anyway it had sheep in. Out onto Hollins and up the hill. I continued along to the path down to Cow Pasture. Then through the stock holding area and down the field below Cow Pasture. The thick set Texel sheep here have all been shorn and look particularly clean. Over the beck and then the path down to the stables, could do with someone with a strimmer here as there are a lot of nettles either side of the path. I grabbed a dock leaf at first opportunity in case I got stung with only having shorts on! I survived the ordeal and returned home via Priory Way and Valley Gardens.

Plenty warm enough and glad of my hat.

Here is the route, just short of 2.5 miles. I wish I could find out how to change the map to satellite view. The OpenStreetMap view is a bit bland. 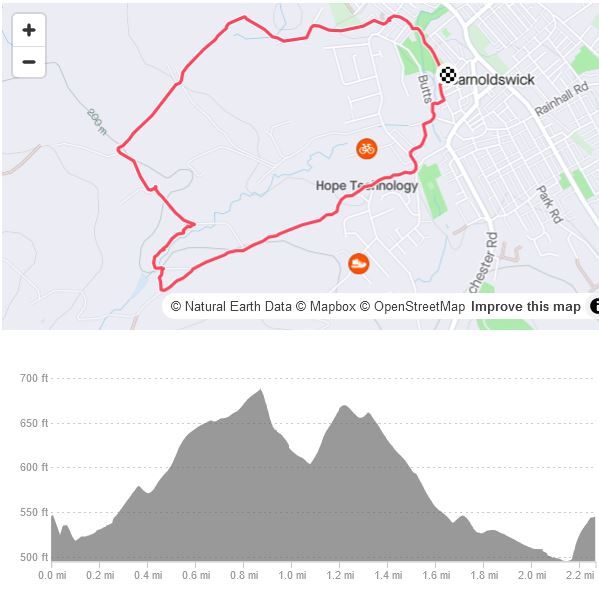 Multitasking today, bread production, walking and taxi service all in one afternoon.

I started by mixing my dough, giving it the required kneading and then setting it aside to prove. Sally and Wendy walk together on Thursdays and it was Sally's turn to set the route. She had decided on walking over to Gisburn and asked if I could pick them up later in the afternoon. No real problem there but I fancied a walk as well.

We set off together Sally going to meet Wendy and I on a normal escape round the Parrock. I then went up Calf Hall Lane and up to Cow Pasture. Down the field to the footpath to the stables but then took a left and on to the opposite corner of the field. Stile here down to New House and out onto Brogden Lane. Left back towards Barlick then I took the footpath across the field towards Fernbank. Once at the stile at the other end I crossed the small beck and then found that the footpath up the hill was now fenced in. I noticed a few posts going in the last time I walked this route. Here is the view back down to the beck. 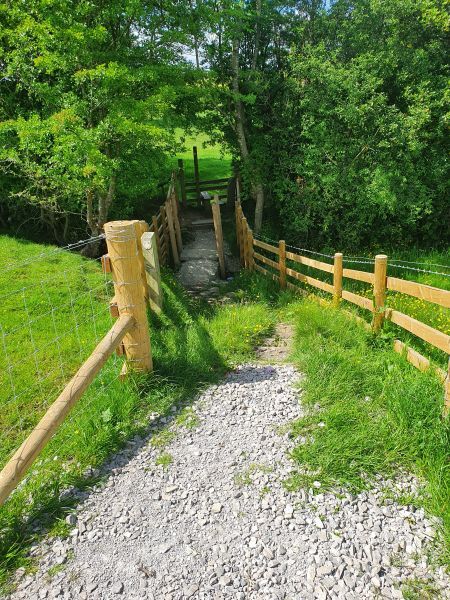 This is the view looking up the hill. 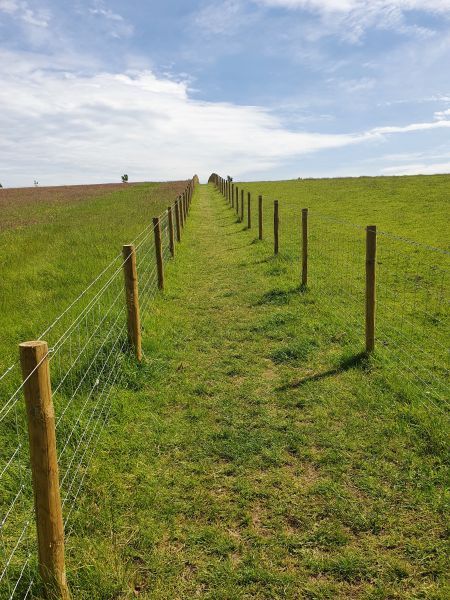 Looks like the field has now been split into two. It was rather a large field. At the top of the hill where the field levels out towards Fernbank there is a new wooden kissing gate installed about halfway along the route. Just to the other side there are three new gates, one set into the fence at each side and a third gate for access into the adjacent field. The new fencing extends all the way down to Fernbank, the original metal kissing gate is still present at that end.

This notice of a footpath diversion was on a post just into the old mill yard. Seems like they are looking towards future development there by diverting the pathway around the edge of the site rather than straight across to continue on through to Priory Way as it does now. The notice was posted in late May. 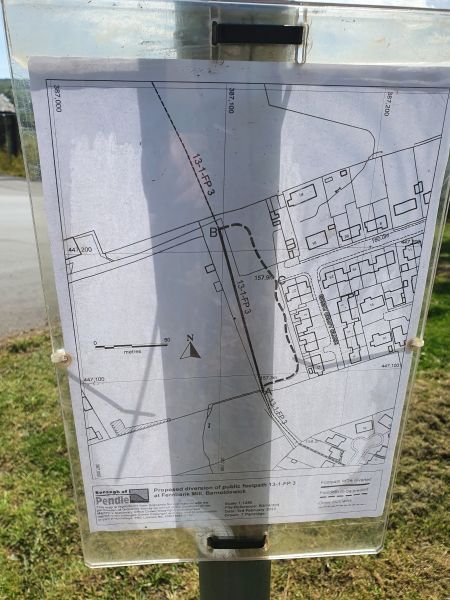 I doglegged back down Fernbank Avenue then came up Coniston Ave, I diverted down onto Gisburn Road as I fancied treating myself. I called into Singh's and got myself a Magnum Ice cream. Back through valley Gardens and home.

My bread had proved so I knocked it back and formed it into today's creation which is a Plaited Chia with Wholemeal. Set that aside while I had a brew, just finished when Sally rang to say they were ready for pick up in Gisburn, nice timing. My bread was ready for the oven by the time I got back. Result is in the bread thread.

Here is my route, you can see I have figured out how to get the satellite view.

I did a quick walk yesterday as I was a bit late setting off. Just down to Park Bridge and down onto the canal, back to the marina and back up over Cockshot Bridge to have a look at the new urban spread up there. About a dozen new houses, built on green field of course. 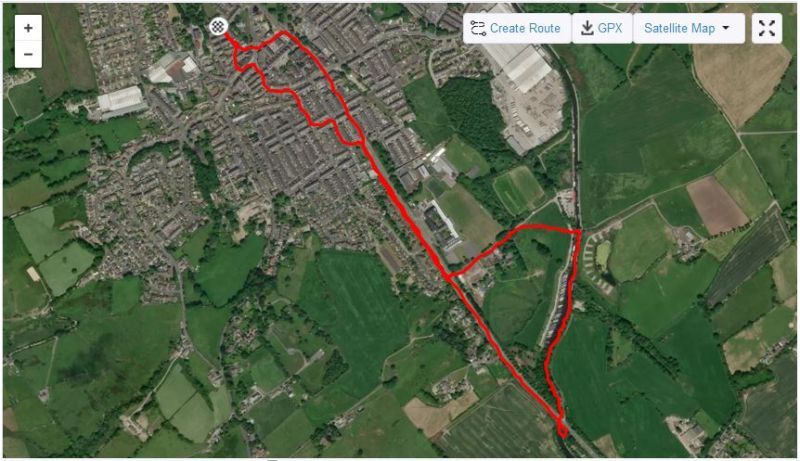 2.6 miles, it was rather warm, got back about 20 minutes before Sally who had set of an hour or so before me. She went up Lister Well to Duckpond then over the moor to Weet's summit and returned via the ridge, Standridge and Folly. About twice as far as I walked. 5 to 6 miles is about her average daily walk.

We are off up to Hawes, (Gayle actually) for a long weekend, footpath maps have already been sorted.

Walking is probably the thing I miss most as the effects of the years bear down on me. I hope you have a good weekend.....
Stanley Challenger Graham
Stanley's View
scg1936 at talktalk.net

Thanks Stanley, I have charged the batteries for my little hand held radio and the Canon DSLR. I am taking the tripod as you get dark skies up there and a good aspect to the North. Not proper dark at this time of the year but I might get the opportunity of some Noctilucent Clouds just after sunset.
Ian
Top