I'll be 67 in November and I never knew that, or about Kangaroos respiratory system. I bet Darwin had to think about that too.

I first found out about the koala pouch from reading one of Richard Dawkins' books on evolution, `The Greatest Show on Earth'. He's full of interesting facts, especially ones like that which help counter the creationists idea that a grand designer created us and all the other creatures. He wouldn't have given koalas pouches the wrong way up. Another example is that in mammals the Vas Deferens tubule doesn't go straight from the testes to the penis - it goes way up and loops over the ureter from the bladder and then back down again to the testes. You wouldn't design it that way but it has arrived so accidentally by a series of evolutionary steps.
Top

All news to me as well, I love finding out new things like that. Totally useless of course in the Grand Scheme of Things but I'm sure seeking that sort of knowledge is good for us.
The other wonderful thing to me is that I shall remember that information until I die. (Or my brain stops functioning for other reasons.) I love sitting quietly and letting my mind wander, it's quite amazing the way trains of thought build and take you to unexpected places. Is this the 'mindfulness' that's become a modern craze?

(I think the big crows on the Green do a lot of thinking.....)
Stanley Challenger Graham
Stanley's View
scg1936 at talktalk.net

We are often told that evolution is wonderful at creating living things but the truth is that it often has arrived at what we observe by a tortuous route, not one that a designer would ever follow. It proceeds by millions of tiny steps over a long period of time, each step being nudged one way or another by slight changes in the environment. Something big like a volcanic eruption or asteroid impact makes a massive change to the environment in an instant but evolution will simply begin adjusting to a different set of small steps.
Top

That's how I understand evolution as well Peter. I regard GE as us giving evolution a nudge and GM as driving a coach and horses through it. Is that a reasonable understanding?
Stanley Challenger Graham
Stanley's View
scg1936 at talktalk.net

If by GE and GM you refer to genetic engineering and genetic modification the terms are used interchangeably to mean altering the genome of an organism artificially. Arguably it's all part of natural evolution because we are simply one living organism affecting the evolution of another. That goes on all the time in nature. There are more purple flowers than red flowers because bees like purple best!
Top

That makes everything clear......

Look who was sitting on a fence post outside our window this afternoon! I knew that my first identification was wrong as soon as it turned round.

Yes, I believe it is! Bold as brass, it sat there for a good 15 minutes watching me taking photos through the window.
https://www.wunderground.com/personal-w ... UNITEDK203
Top

I thought it was a sparrow hawk till I saw it's beak. Perhaps a youngster? I think they are left to fly off to foreign climes by themselves once they have fledged.
https://www.wunderground.com/personal-w ... UNITEDK203
Top

I think that's the most likely explanation Wendy. I've heard them and never seen one and my first thought was a raptor like you. (Amend that to "as you did" otherwise you might be misunderstood Stanley!

)
I am sure that the wild birds are getting more confident as the world has quietened down. There was a blackbird on the grass near the bus shelter and it was within 18" 0f my feet and totally unconcerned. It only moved when Jack almost peed on it!
Stanley Challenger Graham
Stanley's View
scg1936 at talktalk.net

The swifts flew back to Africa early this year. They must have had advance warning of the weather conditions we're now suffering. We're still predicted to have thunderstorms through to and including next Monday. They were predicted for all of this week but the fact is we haven't had a single peal of thunder where we live. But it's been very humid and hot and looking out of the window now it's still dismal and misty. Enervating conditions. Even the seagulls have disappeared - they're probably sitting it out on the school playing fields.
Top

I looked up cuckoo after that photo, and half wish I hadn't.

There are literally hundreds of different sorts. Also I read an article - which I can't find now of course - quite recently, and I'm pretty sure it spoke of immensely long journeys to Asia via Africa by a cuckoo.

Interesting things birds - I bought a small brightly coloured parrot type, in Kuala Lumpur, and had an interesting journey back on the train to Singapore. The Sikh ticket inspector insisted it needed a ticket as it was a creature. I insisted that as it had its own cage, it was hand baggage, and therefore free. . I won.

Who writes all the stuff on Wikipedia? I'm beginning to think it's mainly people 'on the spectrum' with an obsession for the subject . I watch a bit of chess on the computer, and see the same thing there. People who - with undiminished enthusiasm - comment on games, hour after hour and day after day.. Wired up different I think.

"Wired up different"
That strikes a chord David. How many times do I get into trouble because I see things differently than most?
Stanley Challenger Graham
Stanley's View
scg1936 at talktalk.net

Is it my imagination or are there fewer birds about during the last few days?
Stanley Challenger Graham
Stanley's View
scg1936 at talktalk.net

Whyperion
Senior Member
Posts: 2236
Joined: 23 Jan 2012, 22:13
Location: Stockport, after some time in Burnley , After leaving Barnoldswick , except when I am in London

Some waterfowl are attempting a second brood as are others. But the jet stream is speeding up and atlantic storms on their way, the songbirds have noted the days getting shorter and the insect season is starting to diminish,
Top

Seems to be more geckos around this year. Last night I couldn't sleep and went down to the kitchen to make a cuppa. There was the cutest baby gecko, only about 30 mms long, on the floor. They can't run fast on ceramic tiles so I carefully caught it and let it go upstairs in our roof garden where I hope it will be happy with the ones that live up there. This is the third one I've caught inside in the last 2 months and there is at least one more bigger one, about 10 cms long, last seen on the wall behind the kitchen fridge. We have sliding windows and doors which are left open for most of the year with just the insect screens closed. They're small enough to get in under the frames. I personally don't mind them as they eat insects but the Chinese regard them as unclean. They change colour to blend in with the background.
Top

Love Geckos, I always find a few in my place over Summer. They are hard to pick up , being so soft, to put back outside.
I know I'm in my own little world, but it's OK... they know me here.

How are you on Governor Spiders Cathy?

I had to kill 2 Red-backs yesterday, they were in an unused plant pot.

I'd agree with that! Same with Brown snakes and Red Bellied Blacks. 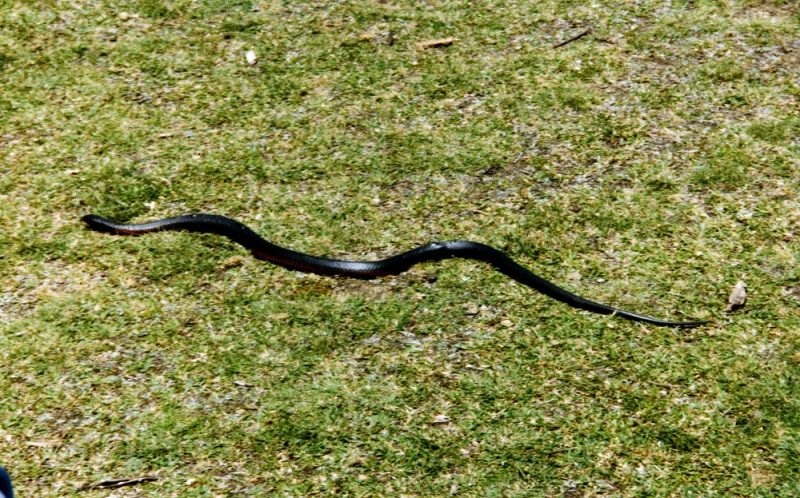 I once had a close encounter!
Stanley Challenger Graham
Stanley's View
scg1936 at talktalk.net