I had a reasonably early night on the Friday before the August Bank Holiday. I set the alarm for 6.45am and got up at around 7.00am, after a quick shower I had a breakfast of porridge with sultanas and banana followed by two leisurely mugs of tea. Jack came round with his bags for the car and then went back home to pick his bike up and cycle down to Rolls. A quick trip to the loo and we were out of the house by 8.15am.

Here we are assembling down at Rolls and the bikes being loaded into the van. 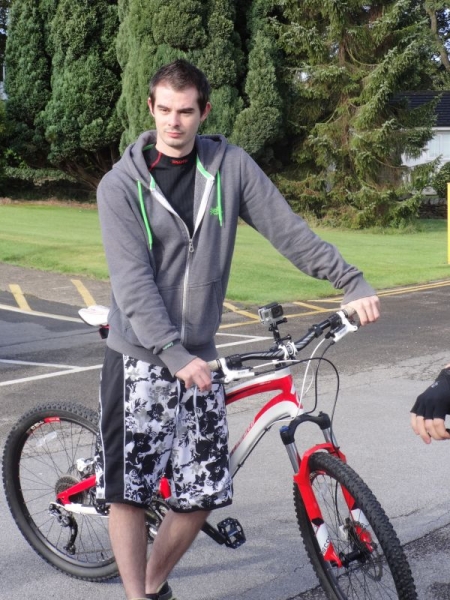 I drove Sally and our lad Jack and we took Linda and Peter who had come over from Barrowford, they brought their bikes on the car and left it parked up at Rolls. Vicky, took her mum Kate and dad Mick along with Julie and Martin who had travelled from Whalley. They left their car at Rolls as well. Julie and Kate work together as NHS practice nurses in Clitheroe and as such were the natural first aiders for the weekend trip. Ian took Catherine and the last of our riding team Will in the van. We were just a little late setting off.

After an uneventful drive we arrived in Morecambe at around 10am. We had arranged to meet in the car park next to the Eric Morecambe statue on the front. 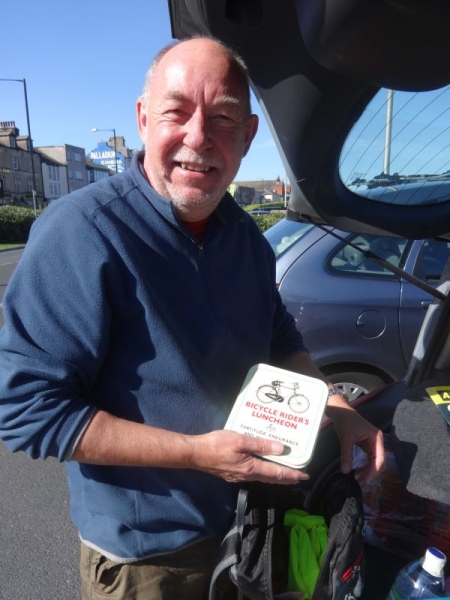 After unloading the bikes and everyone’s day packs and rucksacks we made final checks on all the bikes and assembled up at Erics statue for our first full group photo. The actual start of the route and the Way of the Roses sign showing 170 miles to Bridlington is behind the Midland Hotel so we cycled to the start for a few more photos before setting off. Our first day would take us to Airton on the route and see us in Malham for our bed for the night. The route across country is predominantly on established cycle paths, little used country roads, lanes and in some places farm tracks. Eight out of the ten riders were riding mountain or hybrid bikes, Martin and Julie were on road bikes. The route out from Morecambe and Lancaster basically follows the river Lune, our first official stop was 16 miles in at Bridge House Farm Tea Rooms in Wray. After a short break we pushed on for our next stop for lunch at Clapham Reading Rooms at 27 miles this would set us up for the last part of day one, the climb out of Settle. The route from Clapham reaches Settle via Austwick and then skirts just South of Helwith Bridge adjacent to the river Ribble down to Giggleswick and then into Settle itself. The route was gradually gaining height on each leg of the journey. From sea level at the start we gained 150 metres between Lancaster and Hornby and 200 by the time we were in Clapham, a further gain to 250 meters between Austwick and Settle.

We pushed straight on to attack the climb up Settle Highside which reaches a height of 380 meters over a 3 mile stretch out of the village and has the steepest climbing sections of the whole route. The summit is a welcome relief and we stopped here for about 10 minutes to recuperate from the climb. After a mile or so along the top you get a 3 mile freebie down off the fell into Airton. We could have taken a different route down into Kirby Malham which would have put us a mile and a half nearer to Malham but we decided to stick faithfully to the route and take the hit of the extra 3 miles to our destination. We arrived in Malham at around 5.30pm. The secure bike storage at the YHA was already full so we loaded all ours back into the van and locked it up for the night. Ian, Sally and Vicky had already checked everyone in at reception and ferried all our bags to the accommodation blocks. We booked a 6 bed dorm for the gents, a 4 bed for the girls and a double room that was available which was eagerly taken up by Linda and Peter. Kate had booked us in at the Buck in Malham for an evening meal at 7.30pm.

After a welcome soak in the shower and out of the cycling gear we met up in the YHA reception then hit the pub for a couple of beers with our evening meal, I had roast belly pork with roasties, mash Yorkshire pudding, peas and gravy, it went down very well. We discussed how we had done on the first leg and plotted our strategy for the second day. As we had already cycled an extra 3 miles off route up to Malham it was agreed that Ian would ferry all the bikes back down to Airton to pick the route back up on the start of day two, the other support vehicles would ferry the riders. In order to get a good drop on the second day we would need to be ready to start from Airton at 7.30am. Not long after 10.30pm we were back at the YHA ready for our beds. Phone alarms were set for 6.00am, I was asleep not long after my head hit the pillow.
Ian
Top