Thanks China. At least its novel, the other main ones don't have the centrifugal force involved. Sorry I still don't go for it. The main objection being that with the pole plan view as shown there would still be a centrifugal effect in the 'low' tide areas. Also for the tidal bulge to keep up with the moon's rotation it would have to travel at over 1000 mph.

Hope all is OK with you China.
If you keep searching you will find it
Top

Thanks Sue. Yes, I'm fully recovered and better than ever now, hopefully there is still a few more years left in the old dog!
Top

Don't take them all China, leave a few for me.
Stanley Challenger Graham
Stanley's View
scg1936 at talktalk.net

China, that Cosmos Magazine article is good, very easy to understand. There's a good graphic part way down this web page too: Barycenter Under `Gallery' look at the 3rd graphic along - it show the Moon and Earth.
Top

Tizer wrote: ↑
31 Jan 2020, 12:51
China, that Cosmos Magazine article is good, very easy to understand. There's a good graphic part way down this web page too: Barycenter Under `Gallery' look at the 3rd graphic along - it show the Moon and Earth.

I came to the conclusion that the Earth would wobble as the moon rotated round it. From this the gravity at the surface should change. I haven't figured out how much this change would alter the density of water causing it to expand. Although 0.5% over 4km depth of water would give a 20m rise at the surface. This is just me thinking, Proof required.
Top

I don't think the change in gravity would have much affect on the water, which is fairly incompressible. Also any effect would probably be insignificant compared with that of pressure.
Top

Anyone who has ever had a slug of water in a steam engine cylinder would agree with that! 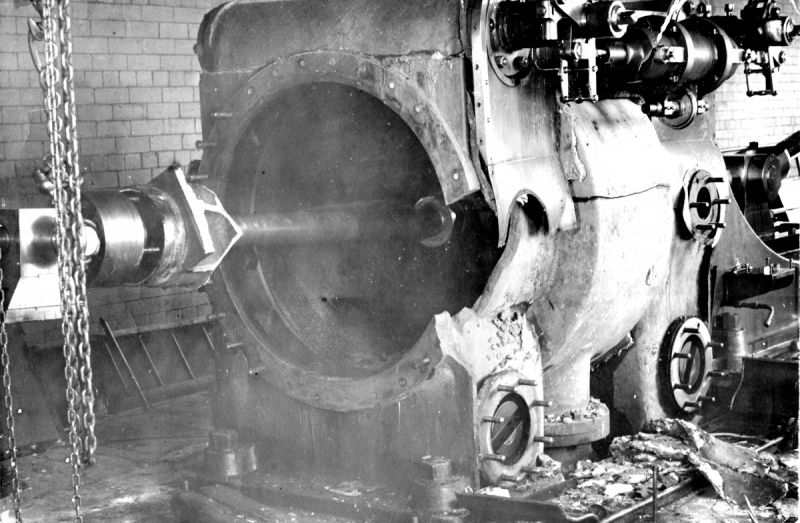 Nowt like a practical demonstration Tiz. This one was unplanned but happened.... Crow Nest Mill.
Stanley Challenger Graham
Stanley's View
scg1936 at talktalk.net

This fits nicely with Stanley's photo above...
`The research centre dedicated to the science of cracks' BBC

Cracks.... Lovely link Tiz. I have always been fascinated by two things in mechanics, cracks and corrosion. I have been observing their effects over the years. One LKF about the M6 is that when they used Tubular girders extensively in the construction they introduced cracks caused by the temperature gradient behind welds in the structure and I believe that structures like the Broughton road end fly-over are still inspected regularly. The first Severn Bridge was never entirely serviceable because of heat zone cracking caused when they welded the bulkheads into the hollow section deck elements so they could float them under the bridge to lift them in.
When I was talking to the head of Tribology at a major university during my research into the plane crash that killed Big Harry he asked me where I had studied the subject and congratulated me when he found it was all from practical experience. Corrosion is closely liked with tribology and I could bang on for hours about it!
(Incidentally, he sat on the committee that named the subject and said that they decided that 'tri' should be pronounced as in 'try' and not as in 'tribute'. An LKF for you....)
Stanley Challenger Graham
Stanley's View
scg1936 at talktalk.net

See THIS Guardian report about the discovery of what could be an effective new source of antibiotics. It was done by creating an artificial intelligence algorithm and letting it loose on existing databases of experimental results with the instruction to look for promising characteristics. It searched millions of entries and came up with a result far faster than we humans could.
Impressive but at the same time it's frightening.
Stanley Challenger Graham
Stanley's View
scg1936 at talktalk.net

See THIS BBC report about the biggest explosion in space since the Big Bang. I find the numbers they quote incredible, I just can't imagine a space big enough to hold several Milky Ways! They say it was big enough to warp space and time when it happened. Glad we weren't nearer to it!
Stanley Challenger Graham
Stanley's View
scg1936 at talktalk.net

Optimistic news from Queensland University that the search for a vaccine is going well and they hope to be testing it on humans by June. Of course it may not work but the professor sounded optimistic.
He also said that one advantage they have is that this virus doesn't seem to mutate as fast as bog standard winter Flu.
I do like good news!
Stanley Challenger Graham
Stanley's View
scg1936 at talktalk.net

I didn't know about BBC Future but find that it has many interesting articles and takes the same evidence-based approach as the BBC Reality Check service. BBC Future
Top

Thanks Tiz, a good link, I have bookmarked it.
On the general subject of the search for a vaccine. Understandable that some of the reports are a tad optimistic. I heard an estimate of 12 to 18 months before there was a valid one and suspect that's more realistic.
Stanley Challenger Graham
Stanley's View
scg1936 at talktalk.net

We already know that in the geological record in rock strata in the future there will be marker point of the beginning of the Anthropocene due to the radionuclides deposited since the first atomic bombs were dropped. I'm now wondering if there will be a marker of the first Covid-19 pandemic - less deposition of those metals coming from car exhausts and tyres, perhaps? If I were being flippant (which I never am of course!) I'd suggest there might be a distinct layer in the rocks that turns out to the residue from latex gloves!

That's got to be right Tiz and as for flippancy, how about the layer of plastics and disposable wipes and nappies?
Years ago I was talking to some English Heritage boffins and remarked that in future, archaeologists would have a field day with our middens (but we call it 'landfill' now). They agreed but thought I was going too far when I also predicted that with advances in ground detection devices like magnetic surveys we would gradually refine them to the point where we would be able to detect minute traces of disturbance and eventually would be able to detect individual footprints. I still believe that we will approach this level of detail in archaeological time.
Stanley Challenger Graham
Stanley's View
scg1936 at talktalk.net

`Coronavirus: Pangolins found to carry viruses related to Covid-19' BBC
`Pangolins smuggled into China have been confirmed to contain viruses closely related to the one sweeping the world. Sale of the animals in wildlife markets should be strictly prohibited to minimise the risk of future outbreaks, says an international team. Pangolins are the most-commonly illegally trafficked mammal, used both as food and in traditional medicine. Bats are thought to be the original viral source, with another species playing a role in human transmission. In a new research paper, published in the journal Nature, researchers say their genetic data suggests "handling these animals requires considerable caution, and that their sale in wet markets should be strictly prohibited."
`Further surveillance on pangolins in the wild in China and Southeast Asia is needed to understand their role in the emergence of coronaviruses and the risk of future transmission to humans, they add. The ant-devouring scaly mammal, said to be the most widely trafficked mammal in the world, is threatened with extinction. The animal's scales are in high demand in Asia for use in traditional Chinese medicine, while pangolin meat is considered a delicacy by some. ..'.

That's all there is in the BBC article. I couldn't find it in the current issue of Nature journal but saw this which ios either the same or a similar report: `COVID-19 coronavirus epidemic has a natural origin' Science Daily
In the same magazine I saw this article from early 2018 on the `Illegal global trade of pangolins' LINK
In particular, this is interesting:
`With the decline of the Asian species in recent years, there has been a significant increase in the number of African pangolins seized in Asia. Consequently, in 2016, the Convention on International Trade in Endangered Species of Wild Fauna and Flora (CITES) -- a multilateral treaty to protect endangered plants and animals -- banned all international trade in the African species in a bid to restrict wildlife losses. The new study focused on Gabon, in Central Africa, where, as in many other countries, domestic hunting and eating of certain species of pangolin is legal....The study concluded that the high international price of scales was driving up local costs, with hunters increasingly targeting pangolins to sell them on, rather than for home consumption. Dr Abernethy said: "We conclude that whilst there is clear potential and likelihood that a wild pangolin export trade is emerging from Gabon, traditional bushmeat trade chains may not be the primary support route...."The link between Asian industrial workers working on major projects in Africa and requests for pangolins is worrying, and warrants further investigation."
Top 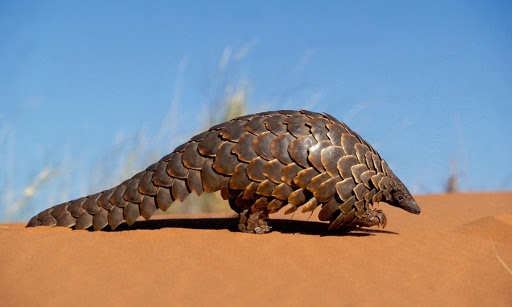 Interesting Tiz. I keep hearing about Pangolins but hadn't the faintest idea what they were so I found this WWF image. Amazing what lurks out there!
Stanley Challenger Graham
Stanley's View
scg1936 at talktalk.net