From the song 'Abdul Abulbul Amir' ... Then this bold Mameluke drew his trusty skibouk ... Could this be the mystery Skibouk?
Top

Not unless he was a weaver, Plaques! I think it's time for me to give you all the answer because it's not an easy Mystery Object to correctly identify. It's something I was unaware of until I read about it in Mrs Tiz's `Current Archaeology' magazine. It's shown and described on their web site in this page: LINK

"In the course of excavations on the site of the former Beamish and Crawford Brewery in Cork City, Ireland, earlier this year, a perfectly preserved Viking weaver’s sword was discovered. It was a striking find, as it cements the idea that medieval Cork had a Viking presence. As Dr Maurice Hurley, a consultant archaeology, said, ‘For a long time there was a belief that the strongest Viking influence was on Dublin and Waterford, but the full spectrum of evidence shows that Cork was in the same cultural sphere and that its development was very similar.’

The sword, dating roughly to the 11th century, is made entirely of yew and measures just over 30cm in length. It is so well-preserved that the human head on the pommel of the sword and the Ringerike-style Viking art embellished on the grip are all clearly visible. While similar weaver’s swords have been found in Ireland – most notably in Wood Quay, Dublin – this find is unique in its quality and preservation. ‘The sword was used probably by women to hammer threads into place on a loom; the pointed end is for picking up the threads for pattern-making. It is highly decorated – the Vikings decorated every utilitarian object,’ said Maurice.
Top

Thanks Cathy. I liked that last comment by the archaeologist - `..the Vikings decorated every utilitarian object'. Too much attention is given to their warlike behaviour and not enough to their artistic side. Current Archaeology is an excellent magazine and shorter versions of many articles appear on their web site for free: LINK They try to provide a different perspective on archaeology and make it interesting to a wide range of people rather than just academics. For example, the article titled Feeding the ‘builders of Stonehenge’ looks at the problem of how those folk obtained their food and what they ate.. There are always surprises and modern scientific techniques allow them to show that the food was often not locally sourced but brought from afar.
Top 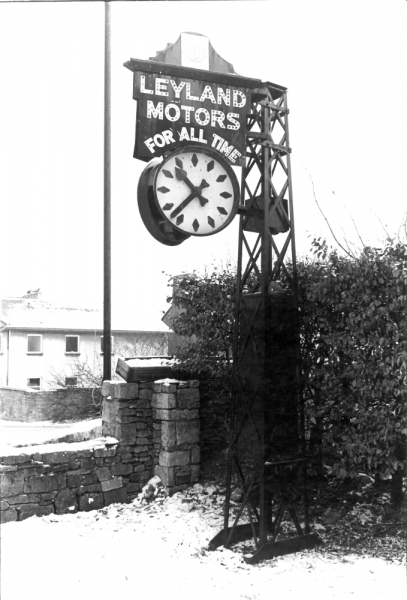 What can you tell me about this? I did the pic in Kendal outside the museum but this wasn't the original home.....
Stanley Challenger Graham
Stanley's View
scg1936 at talktalk.net

Seem to recall cycling past one on the way to Blackpool from Manchester ?
Top

Yes, there was more than one. But that wasn't this one......
Stanley Challenger Graham
Stanley's View
scg1936 at talktalk.net

Was it outside the café up towards Shap?
Top

Travis has it. It was between the Jungle and the summit. What can you tell me about this.... 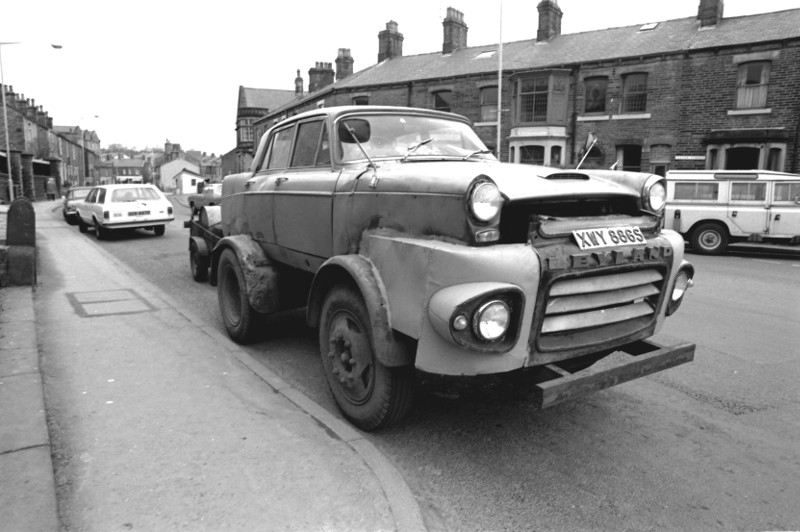 Could it be the result of breeding between species?
Top

I think I have to agree with you Maz. But what was the result? Seen in Water Street in Earby in 1976.
Stanley Challenger Graham
Stanley's View
scg1936 at talktalk.net

It's a BLMC truck with a Morris Oxford grafted onto it??
Can we have the landrover across the road please?
Gloria
Now an Honorary Chief Engineer who'd be dangerous with a brain!!!
http://www.briercliffesociety.co.uk
http://www.lfhhs.org.uk
Top

Sorry to be a pedant, would it not have been 1977? The number plate has an S suffix...
Kev

It's one of the props from the austerity era of James Bond films.
Top

Lovely replies..... The date on the neg is 1976 but there you are I may be wrong. It's actually a Leyland Comet underneath and yes, I think you are right Dave and it's a Westminster shell on top. What intrigued me was that it must have been homologated by the MOT to get a license number. I saw it about for a while and it seemed to finish its days parked in the yard of the out-barn on the side of the road into West Marton from the Thornton road opposite Chris Johnson's farm. The only other thing I would mention is that it had an extremely bad-tempered black Alsation dog on guard!
Good taste Gloria, that was my motor......
Next one?
Stanley Challenger Graham
Stanley's View
scg1936 at talktalk.net

I wondered if that was a retained plate from the car or the truck?
Top

Could be China but the law says that in the case of a major alteration like that it must be inspected and passed. If not it is illegal as the insurance policy would be void.
Stanley Challenger Graham
Stanley's View
scg1936 at talktalk.net

Just on the off chance, does anyone know of a Series 1 Lamdrover hidden in a barn that would like a new home??
Gloria
Now an Honorary Chief Engineer who'd be dangerous with a brain!!!
http://www.briercliffesociety.co.uk
http://www.lfhhs.org.uk
Top

In these modern times is that what they use instead of sheep dogs to bring the sheep in?

Haha ....... Landrover....never re read it.
Gloria
Now an Honorary Chief Engineer who'd be dangerous with a brain!!!
http://www.briercliffesociety.co.uk
http://www.lfhhs.org.uk
Top