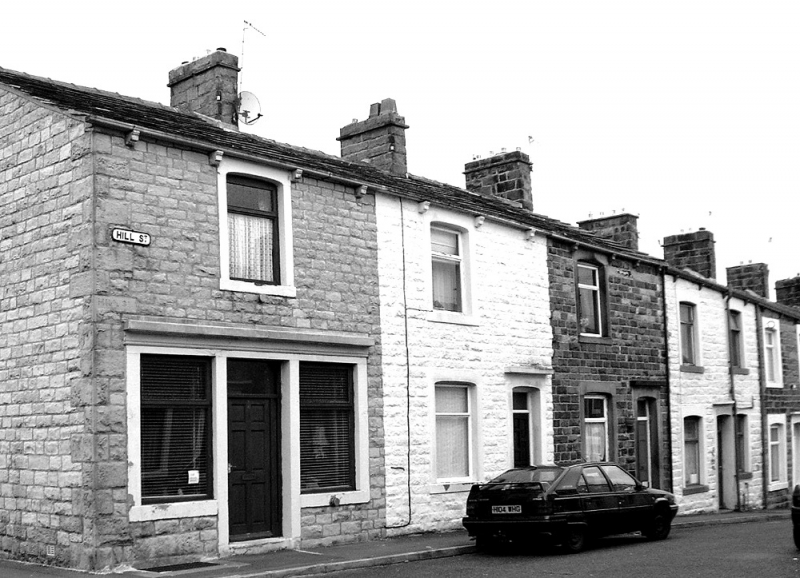 Mentioning Sough yesterday reminded me of one of my old subjects but I don't apologise for going back to it, it was so important. Here we have what used to be a corner shop on Hill Street part of a build of three houses. This would be financed by one of the working aristocracy, possibly a tackler or taper who built for his own accommodation, a shop to give an income and run by his wife and the other house for a retirement income in the days when there was no national pension, only the workhouse or charity.
All swept away by the advent of modern food retailing in the shape of the supermarkets. A forgotten corner.
Stanley Challenger Graham
Stanley's View
scg1936 at talktalk.net

I tripped over this research note from Geoff Shackleton which is on the site already but buried in information about Barnsey Shed. I think it qualifies as a forgotten corner.

Stanley has some comprehensive records of this mill so any common notes are not repeated here. I can however add some details for the engines and the change of ownership period around 1889.
C&NT 25/04/1885 Several engine breakdowns are being commented on. Large spinning mill engine in particular.
C&NT 20/08/1887 All the machinery is to be sold at auction.
C&NT 12/09/1887 All machinery to be sold on Mon, Wed, Thurs of this week.
TM 15/11/1887 A Company has been formed to take-over the extensive works which formerly belonged to Mr. William Bracewell. The weaving sheds contain 1078 looms which together with the foundry has been purchased for £15,750. (This refers to Burnley Ironworks and the shads attached to it.)
CFT 18/05/1888 WH Mill has now been stopped nine months.
TM 15/08/1888 WH Mill belonging to Messrs W. Bracewell has been stopped indefinitely and their other mill Butts will stop this week. Thus 500 hands are out of work. The estate is in Chancery and it is said that the machinery will be sold.
TM 15/09/1888 WH and Butts Mills remain at a standstill.
CFT 26/06/1889 Reports stating that WH and Butts Mills have been sold are not correct.
CFT 4/10/1889 The 768 looms in the shed have been disposed of. The larger part fetched only breaking up prices.
Yorks Post 23/11/1889 Matthew Watson to sell by auction at Wellhouse Mill on December 9th three powerful steam engines, shafting gearing, piping etc. The engines are described giving principal dimensions. A 1250 ihp twin beam engine which drove the spinning mill. A single beam engine of 300ihp which drove the shed and a single beam engine of 150ihp which drove the mechanics shop.
13/12/1889 All the engines were sold at auction on Monday last.
CFT 14/03/1890 A number of shareholders are to decide on Saturday whether to form a Company to purchase WH Mill which has been offered to them by the Craven Bank for £8,000. (This was Calf Hall Shed Company)
CFT 17/10/1890 The new engine house is being pushed on with but it will probably be next January before any looms are running.
CFT 17/04/1891 and NC 17/04/1891 Both describe the engine Christening which took place on Sat 11th. Mrs. W. P. Brooks Christened the engine 'Progress'. Made by Burnley Ironworks, and it was hoped that they would soon be asked to provide the other half of the engine.
From Burnley Ironworks Drawings:

BIW's O/N 111 1890 A tandem engine for the CHSC being a left hand engine. hp cylinder Corliss all below and lp cylinder had double ported slide valve. Flywheel and flywheel shaft prepared for a second side.
BIW's O/N 149 1895 (Jan) The order for the right hand side engine to be supplied. Same design as the existing left hand engine.
BIW's O/N 129 1915 A single cylinder barring engine.
BIW's O/N 165 1927 Rebuilding of the original left hand engine with new cylinders, new hp engine bed new valve gear and connecting rods. New cylinders were both Corliss with valves at the four corners.
The original governor was a Porter Governor on a stand to the left of the FW and just behind (meaning toward the engine cylinders) the main crankshaft. Govs later changed for Whitehead.
Stanley Challenger Graham
Stanley's View
scg1936 at talktalk.net 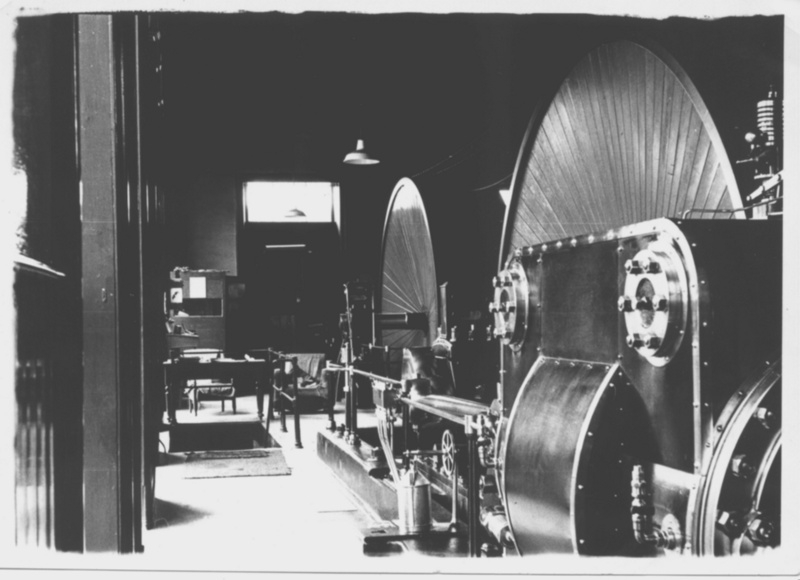 Wellhouse engine 'Window Side'. This was the first side of the engine to be installed and was later the first to be refurbished, after this it was called the 'New Side'. This is confusing as the right hand engine was called the new side originally as it was the last side to be installed. Pic taken 1965. Notice the governor in the top right of the image. As Geoff said, it had been changed to a Whitehead by this time.
Stanley Challenger Graham
Stanley's View
scg1936 at talktalk.net 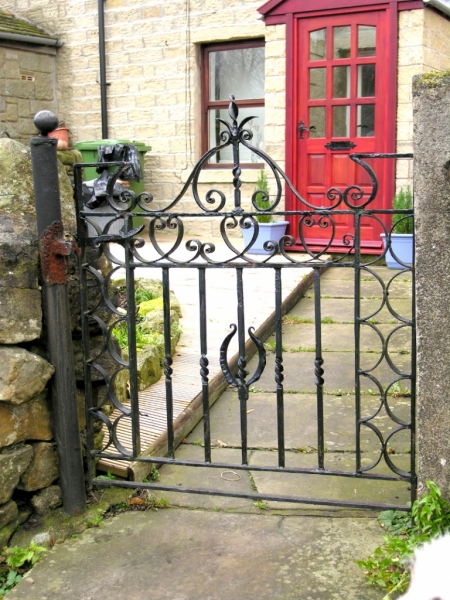 Gate at 9 Cragg Row Salterforth. Made by Hartley Wilkinson, blacksmith of Earby and Kelbrook who I think lived here. Rebuilt by SG in 2003. I haven't looked lately, I hope they are looking after it!
Stanley Challenger Graham
Stanley's View
scg1936 at talktalk.net 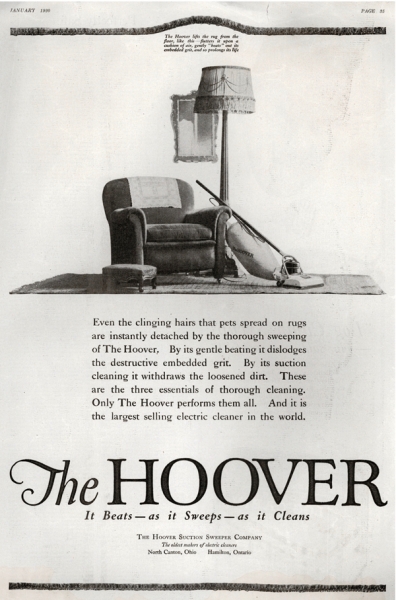 Aye, and now apparently we need lasers to detect "invisible dust" and deal with it with a microprocessor and a motor that is scientifically impossible. Free postage though for the £600.00 snake oil sellers machine. 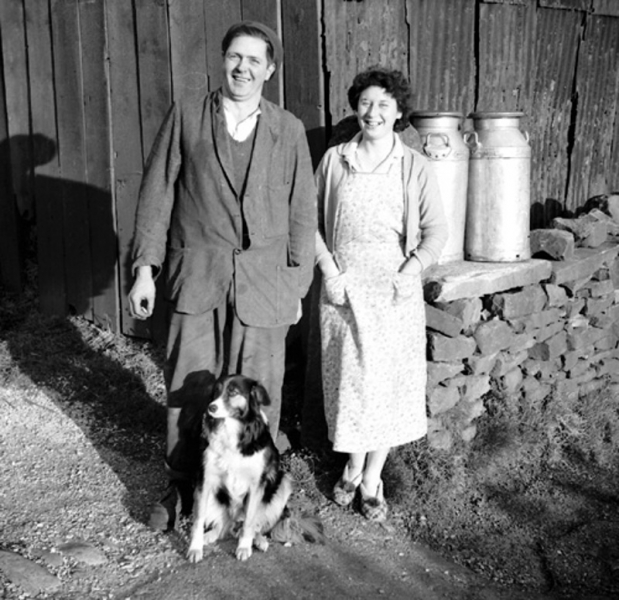 John and Mae Wallbank at Brown House Farm, Gisburn Old Track in 1957. This is an old favourite of mine. Both dead long since but a lovely couple, pity they never had children because they'd have made good parents. Brown House is only a small holding and was unchanged from how it had been farmed for the last three hundred years apart from getting electricity and a milking machine. Milk production gave them a small but regular income and they could survive, just. In fact I have an idea that for a long time Mae worked as a weaver as well as a housewife on a farm.
All gone now, no room in this madcap world for people and jobs like this. But notice one thing, they are happy and it shows. That in itself is a forgotten corner today!
Stanley Challenger Graham
Stanley's View
scg1936 at talktalk.net

Looking at that picture of John and Mae Wallbank I think back over 50 years to how it was up on those hill sides. Mains electricity was only just reaching them and when I first knew the farms up Gisburn old track they were still using oil lamps in the house and Tilley lanterns everywhere else. Some farms had modernised and had Lucas Freelite systems. See THIS short article on the Freelite. Essentially, in it's simplest form, it was a 24 volt dynamo, weatherproofed and wound so that the slower speed generated by a twin bladed propeller would give enough juice for perhaps 3 or 4 bulbs in the buildings, usually the shippon and used at milking time. Not a very good light but better and safer than a paraffin lamp.
No electricity also meant no labour saving aids in the house and so as far as the housewife was concerned it was exactly the same living conditions as in medieval times. Cooking on the fire or in some cases a paraffin stove and oil lamps and candles for lighting. Washing done by hand in the dolly tub. Battery driven wireless sets.
Difficult to imagine and a forgotten corner now but everyday life up on the moor 50 years ago.
Stanley Challenger Graham
Stanley's View
scg1936 at talktalk.net 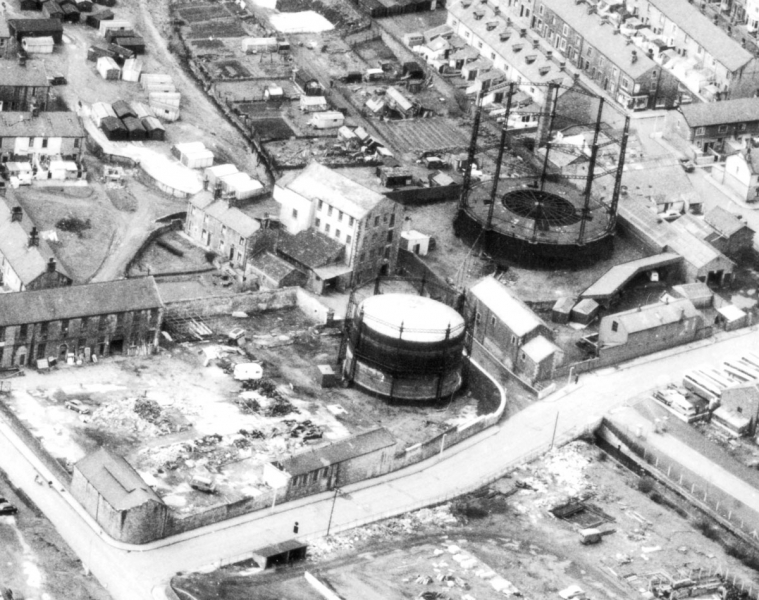 Here's a long forgotten corner for you, the Barlick gasworks in 1963 when it was already being dismantled as the advent of North Sea gas first made the retorts needed for making gas from coal redundant and eventually the gas holders themselves. By the 1970s the gas holders had gone and no longer dominated that part of Barlick. 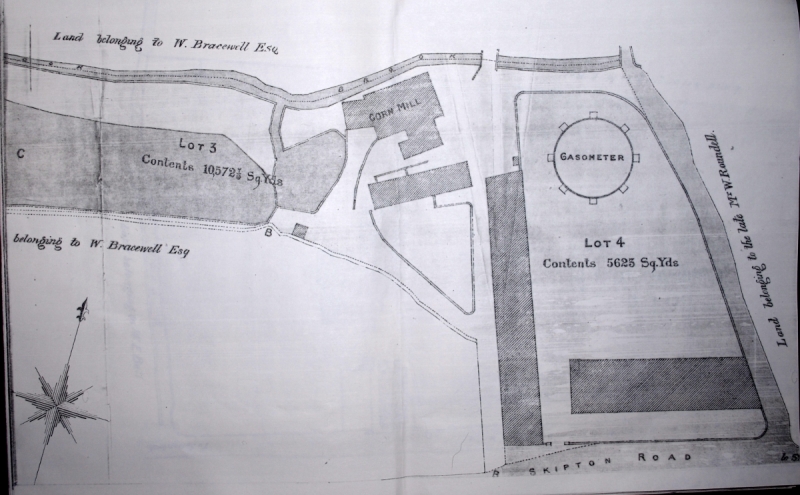 What is largely forgotten now is that the genesis of gas in Barlick started with plants at some mills to provide gas for lighting. There used to be a plant at Wellhouse mill but by the time the Bracewell estate was being sold in 1888 after Billycock's death in 1885 the new gas works that Bracewell built to supply the town was up and running. Over the years it developed into a municipal holding with two gasometers.
Stanley Challenger Graham
Stanley's View
scg1936 at talktalk.net

Whyperion
Senior Member
Posts: 2628
Joined: 23 Jan 2012, 22:13
Location: Stockport, after some time in Burnley , After leaving Barnoldswick , except when I am in London

I always said when Gas holders were decommissioned where would the excess spare capacity for high load be stored ? Although some non north-sea is pumped into undersea voids, it does not seem enough given the high demand this cool autumn is bringing + demand for electric generation
Top

With the demise of coal generated gas at the gas works we lost a source of cheap fuel, coke. Many houses had a two wheeled cart made out of an old packing case and an axle with two pram wheels on it that was used to get coke from the gas works.These became redundant as well.
Coke wasn't as easy to light or burn as coal but housewives soon got the knack of it and of course it was smokeless but gave off some fumes that made you cough if you were down wind. 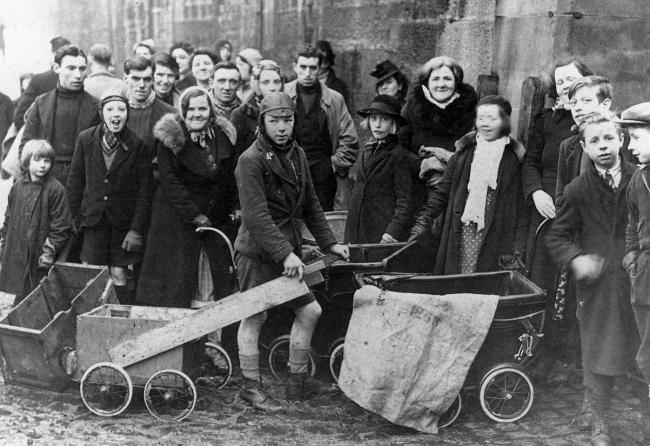