We had a sharp and very heavy shower of rain on Thursday the 14th of August and I have just been reading the report in the BET headed “It's not raining here in Burnley” which was the response a lady down Long Ing got when she rang Pendle Council's drainage department to inform them that the water was rising. The council workers eventually arrived and when they did they were “brilliant”. The lady quite understandably however complained about the response and the time it took. Quite right! What caught my attention was the defensive response by a council spokesperson who cited the fact that Long Ing was prone to flooding and that blocked or inadequate culverts, often on private land, were to blame. Quite! Which is the reason why (as I'm sure you have noticed) I return to this subject occasionally to draw attention to this very matter.
We are on firm ground here, we have the evidence of history. It was neglect of watercourses and culverts that caused the severe flooding in Barlick in July 1932. All right, it was a very severe cloud burst on Weets that was the primary cause but the effects in the town were made much worse by the fact that there was debris and rubbish lying about which choked the culverts and caused the water to take its natural course flooding many mills and properties and causing not only damage but possibly at least one death, a man who was trapped in the stables at Butts. He was rescued by Harold Duxbury but died shortly afterwards probably as a result of his experience.
The message is clear, even though we have the advantage of being on the watershed and not subject to flood water from a wide area higher than us, there is always the chance of a severe weather event and so we would do well to ensure that our watercourses are kept clean and capable of accepting maximum flows. The main danger points are the culvert from the Clough Mill site under Wapping and the ones in Butts under the road and Butts mill which carry the water of both Gillians and Calf Hall Becks including their confluence under the road where they meet before emerging as the Butts Beck behind what is now Briggs and Duxbury's works.
We are very bad at what we see as 'complaining', but alerting the authorities to any suspect watercourses and culverts isn't complaining, it is sensible forewarning. Even if it is something as minor as a gulley grate not taking water in a heavy shower, report it to your local councillor who will take the matter up with the appropriate authority. Remember the old saying, 'A stitch in time saves nine', it's too late when the water starts running into your house or business. Far cheaper and more efficient to ensure that proper cleaning and maintenance is done before the rain falls. Keep your eyes open and make your voice heard. The last thing we want is a repetition of July 1932 and though rare, the certainty is that sooner or later it will happen again. The people in the picture are, no name for boy. L to R; Amos Adams, Albert Gleason, Bill Holmes, Jack Bettinson, John Myers at front, ? Turner behind. 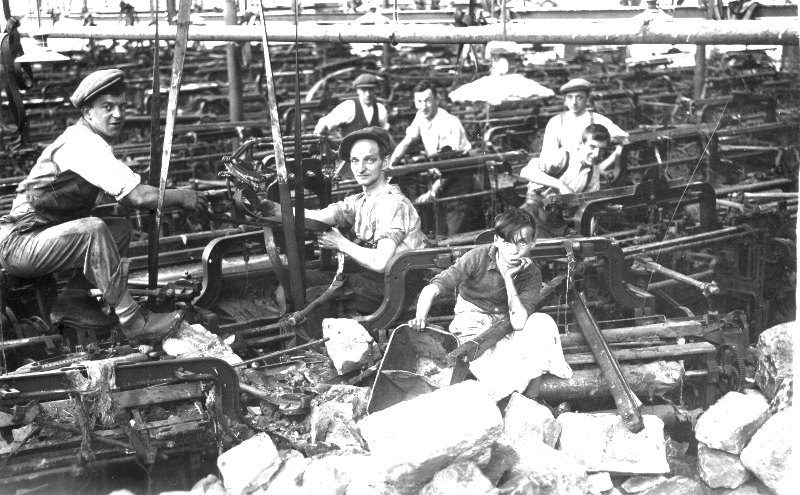 Re: WATERY MATTERS FOR SEPTEMBER

Bumped and image restored.
The message is just as necessary now as it was then. I don't think I have ever see as many blocked gulley grates. If you see oner, report it!
Stanley Challenger Graham
Stanley's View
scg1936 at talktalk.net