Writing about retail shops has reminded me of my favourite sort of shop, one that unfortunately has disappeared from most high streets, the ironmongers. The first one I know of in Barlick was Thomas Boocock who I know was a 'hardware dealer' on Rainhall Road in 1902. However, in my time the name that springs to mind is Elmer's at the corner of Albert Road and Newtown. John Elmer ran it and his father had a chemist's shop next door in Newtown. John's grandfather came to the town from Halifax in 1907 and started the chemist's shop then. I don't know what the original history of the ironmongers shop was but John is the man I remember.
He sold a fascinating range of goods, the smell when you went in reminded you that he sold paraffin and if you wanted a small tool, a roll of pig netting or a new saucepan he could fit you up. He still had old stock when I knew the shop, weaver's scissors, tweezers and weft hooks. He even had a box of 'apron hooks' which fascinated me so much I bought them all off him and gave them away as presents. They were brass hooks with a large head on them shaped like a heart or a star and they were for securing the waistband of the 'brat' that many weavers wore. This was a fent wrapped round the waist and pinned so that it acted as an apron. Even when I was running Bancroft in the 1970s many workers still used them but I never saw anyone using one of the apron hooks, I suspect they were very old stock which makes me wonder just how long the shop had been an ironmongers.
Some ironmongers went even further than John Elmer. Morten's on Cunliffe Road in Ilkley sold engineer's precision tools and materials as well. Anyone who knows me will know that this was sure to attract me! Like John they had old stock and had the delightful habit of selling at the original marked price. I remember that the box of apron hooks at Johns was in the original box marked at 3d each, that's the old penny, today that is about one and a half new pence.
Shops like this were essential to the town in the days long before online sales or easy access to other towns. If a weaver broke or lost one of her tools she needed instant access to a new one. There were other shops as well that came in the same category, Harry Hargreaves on Church Street was a tinsmith. I doubt if many people today would know what that was. He made small items like lading tins, buckets and kitchen wares out of tinplate, that trade was killed by the advent of plastics, nobody is buying tin baths or washing bowls today!
I suppose it's inevitable that these old trades have gone. John's shop has been a tanning salon for years. It's progress I suppose but I regret it. 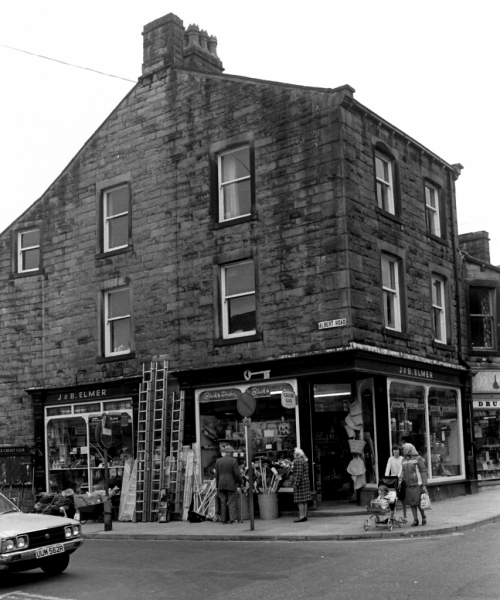 WE LIVED in Over Kellet for 11+ years, and our ironmongers store was Ireton's, in Carnforth, where I think you could buy almost anything in the way of hardware, quite a few appliances, and wait while they shod your horse (if you had one, and it needed to be shod). The Smithy was attached to the shop, and the shop had two rooms on the ground floor and an upstairs room, too. The main room was full of what you might call movable stock (in it was what you might need to fix a toilet or mend a plumbing pipe or build a wall, etc.). It also had the cash desk. The other main floor room was (mainly) for farmers. And the upstairs room was I think a catch all for old stock that someone might need some day but not soon.
Stanley Challenger Graham
Stanley's View
scg1936 at talktalk.net

Do you mean pilkingtons in colne
I remember using them in the 70's for various things also willy whittakers in colne . I came across a box of countersink wood screws that my dad bought from whittakers still had price ticket on box £2.00