When the Cistercian monks under Alexander left Barlick to re-found their monastery in 1152 at Kirkstall the reasons given for leaving were said to be the inclement weather, the depredations of Northern raiders and the enmity of the local population. Their could be an element of truth in these, there were raids by bands of wild Scotsmen at that time and the enmity of the locals is certainly understandable. Though never voiced, it is almost certain that, aided by Henry de Lacy's armed men, the monks depopulated part of Brogden, the Cistercians were noted for this behaviour as one of the tenets of their Rule was to have as little contact with local society as possible. For this reason they favoured wastes and wild places. After this inauspicious start they went on the demolish the local church 'as it disturbed their worship'. They obviously had no intention of winning over hearts and minds.
However, there could be another factor. Alexander obviously had ambition and the fact was that when he came across the isolated community of hermits at Leeds in their remote but fertile valley complete with a good supply of water (far better than at Barlick) he realised that this was a much better site and so it proved to be. He also still had the backing of Henry who arranged the transfer of the land at Kirkstall with another Norman magnate, William de Poitou. By the end of his abbacy in 1182 Kirkstall was a major abbey.
Though the monks had left the town, this was not the end of their relationship with Barlick. They still retained ownership of the Manor of Barnoldswick and established a grange (a detached monastic land holding) at Calf Hall. In 1160 they returned to build a church to replace the one they had destroyed, whether this was a matter of conscience or orders from above is uncertain. The site they chose was at Gill to the east of the village. As with all their religious buildings they dedicated it to St Mary. The popular legend is that they built it there out of spite to make the villagers walk to it but far more likely is the fact that it is half way to Thornton in Craven which at that time had no church and the new build would serve both populations. The priest at the church was from Kirkstall and so the Abbey kept control of the religious life of the village.
The Abbey used the manor of Barlick to generate income and for two hundred years this was a stable relationship but we have no evidence of whether the locals saw this as benign. What is certain is that shortly after 1348 this all changed when the Black Death arrived and changed everything. The changes this triggered were so profound I'll have to leave it until next week. For the time being suffice to say that it changed the monks relationship with Barlick completely and this was the start of the later history of Barlick. 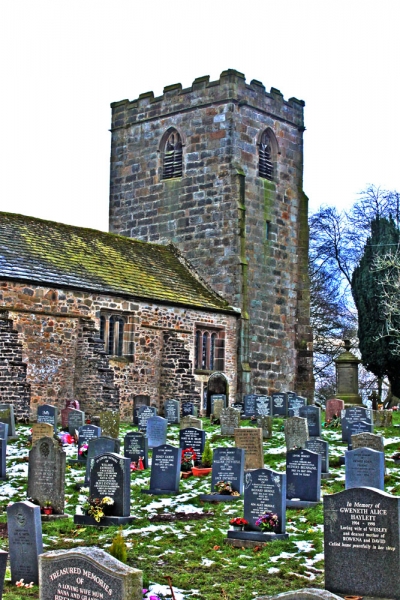 Re: MONASTERY IN BARNOLDSWICK 03

Thank you Comrade. Nolic
"I'm a self made man who worships his creator."

Re: MONASTERY IN BARNOLDSWICK 03

Thanks for commenting Comrade. I needed something positive, I'm fighting with my new programmes!
Stanley Challenger Graham
Stanley's View
scg1936 at talktalk.net