I’m always advising you to stop looking and start observing and questioning. I try to do this myself and sometimes it makes a lot of work! The normal way I come to these articles is with a subject in mind that has some sort of conclusion but today I have failed. Despite a lot of furtling in my archives and indexes I have to present you with a story without a clear answer.
I have always been mildly intrigued by the group of five large trees in line at the front of Cravenside on the Green. Recently I focussed on them a bit more and realised they are Alders. It struck me that this was a bit strange as they are usually associated with damp ground and water side locations. Then I remembered that the clogger’s favourite wood for clog soles was Alder. It is dense, waterproof and easily carved as it has a tight and very even grain. As these trees are close together and in a straight line I began to suspect they had been planted there deliberately.
Then I cast my net just a bit wider and realised there were two more, younger, Alders behind the building that used to be Stanley’s Crumpets, within fifty yards of the others. Convinced that there was a reason for this I started digging and here is what I found.
I started by looking in my index for cloggers in the area and turned up some evidence from Jack Griffin's memoir 'This is my Life'. Jack says that Ted Smith's builder's yard was on the site where the Fire Station is now around 1900. Shackleton the clogger had a red brick building there where Jack and Smith Shackleton used to do boot and shoe repairs. Old Mr Shackleton made clog soles in the cellar of his house opposite the yard. A man called Gledhill had a garage on the same site.
Assuming that old Mr Shackleton had been in business for possibly over 30 years, could he have had anything to do with the planting of the younger alder trees and possibly the larger ones as well? We're pushing the date back to the mid 19th century and this is possibly the case. It would make sense. We know quite a lot about clogs but nothing about where they got their raw materials. Given the number of clogs made each year it would make sense to arrange a supply of wood in the long term by planting Alders. Based on this thinking I believe that these trees are a last link to what was a very important trade, clogging, and a nice example of long term thinking on their part. It might even have been a cooperative enterprise.
As an interesting side issue could Gledhill be the man who founded the Station Garage in about 1920 on what is now the site of Cravenside when the first transformer for the new mains electricity supply was installed in the large red brick building on the fire station site and the site use changed? 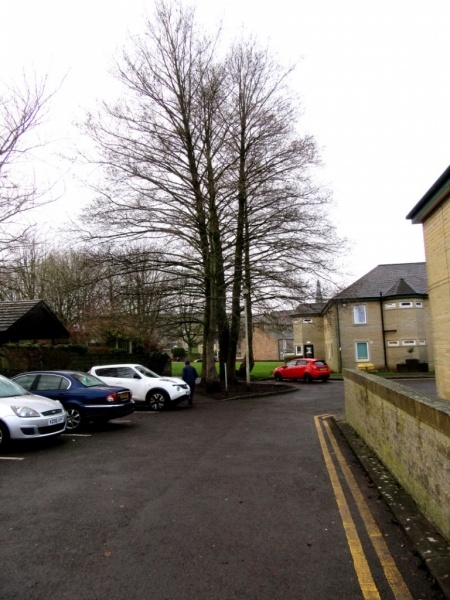 The Alder trees outside Cravenside on the Green.
Stanley Challenger Graham
Stanley's View
scg1936 at talktalk.net