I came across this item when I was doing some research. It is part of an article about Blackburn Fair:-

The Blackburn Standard of 10th April 1861 reported that the Courts had dealt with a number of cases of drunken behaviour by both men and women, due to the large influx of fairgoers from surrounding areas. The big story was about a farmer, Robert Mercer, who was robbed of £100, (today’s equivalent of around £12,000). He had sold some cattle at the fair and been paid around £70 in gold in addition to other currency, including a couple of £5 notes issued by the Craven Bank. Leaving a pub in the Salford area of Blackburn rather the worse for wear with the money in his waistcoat pocket, he was spoken to in the street outside by a man and woman, after which he realised he had been rendered penniless. The pickpockets, William Sunter and Mary Watson, were easily tracked down because they had changed the easily identifiable Craven notes in a local shop. They were both sentenced to a term of four years imprisonment.
Top 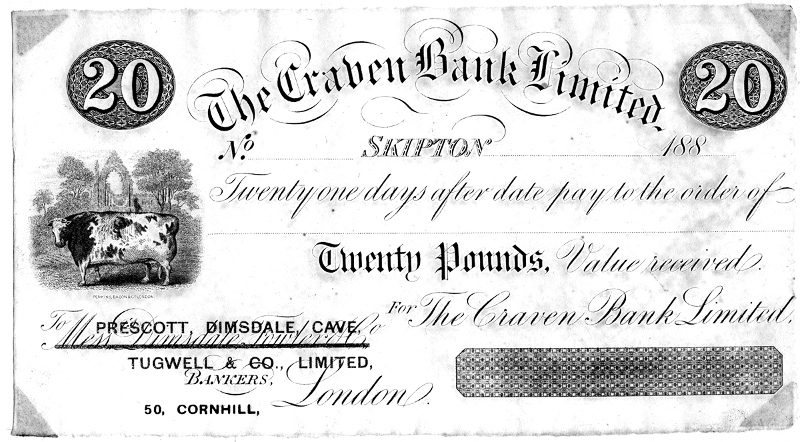 Well I'll go to the foot of our stairs! I didn't expect that!
I've just Googled the Craven Bank... they had their heads screwed on those canny Yorkshiremen. I wonder if that's why there are so many pubs names "The Craven Heifer", because so many of those banknotes were passed over the counter?
Top

It was in a second hand book I bought in Rochdale Rossy.
Stanley Challenger Graham
Stanley's View
scg1936 at talktalk.net