I've just received delivery of two bags of 20mm gravel to top up the existing stuff which seems to have inexplicably disappeared over the last ten years. The weeds are currently winning.

I've also got lots of river pebbles to go next to the river and its feeder pond. Now just need to persuade my fitter offspring to move it all into place. . .

There was a cuckoo calling from the woods on Kelbrook Moor this morning. I'm thinking of Moh as I write this because she always commented on my posts about cuckoos having heard them regularly when she lived in Kelbrook.

We don't get cuckoos here, lots of others but never heard a cuckoo at all.
Gloria
Now an Honorary Chief Engineer who'd be dangerous with a brain!!!
http://www.briercliffesociety.co.uk
http://www.lfhhs.org.uk
Top

This is the new pond I referred to a couple of days ago. The landscape builder made the walls using local sandstone and put in the pond liner. He left extra stone for us to make the rockeries at each end of the pond. We've planted the alpines in the last two weeks. I've mentioned the birds that visit the pond to drink and bathe, including the pied wagtail. Yesterday evening there were sparrows (rare here!), blackbirds, tits, and a goldfinch. Oh, and the inevitable pigeon! The pebbles for the beach were bought at garden centres - the small ones are from the Scottish Highlands and the large are from the North Sea. The slate slabs are local and are recycled from a garden were the pond was removed. The pond water is going through its initial green phase at the moment due to algal bloom. We've put in a small basket of barley straw which is supposed to help clear the water (or might be an old wive's tale!). 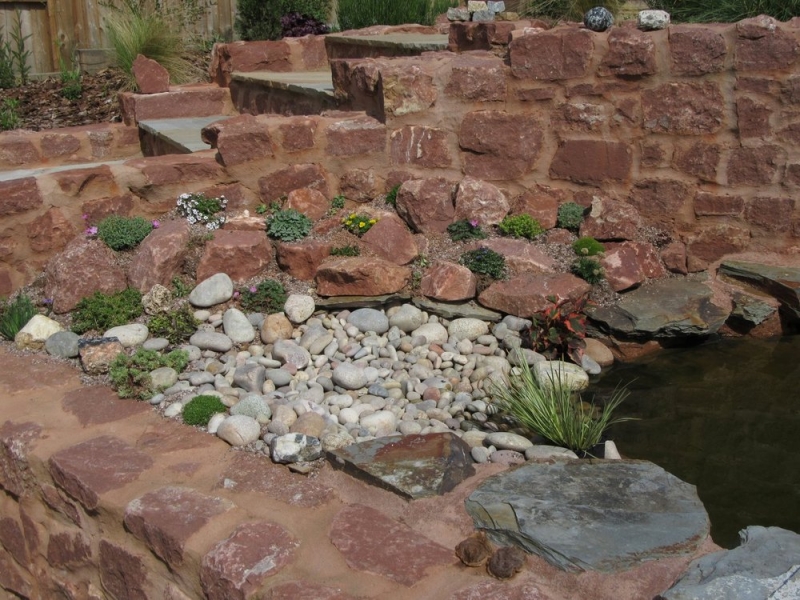 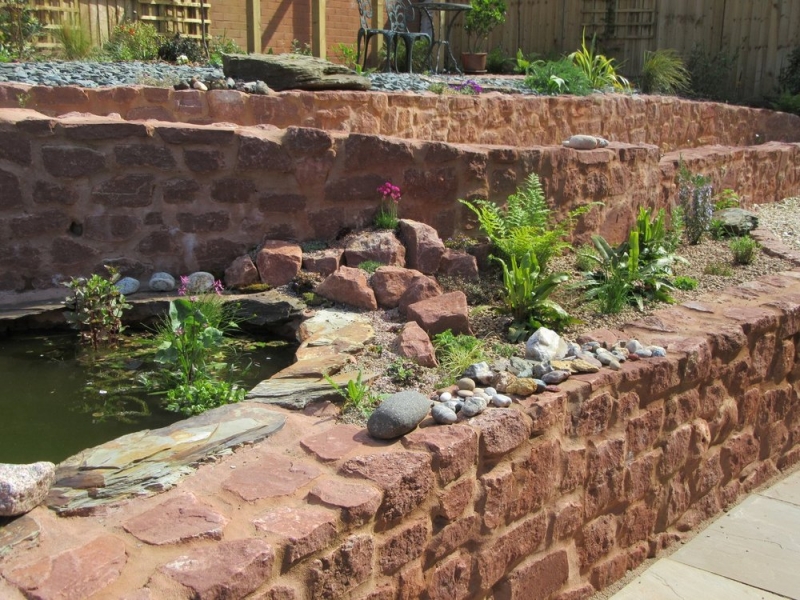 Looks great Tize. Once the wildlife see that it is ready to use, it will be Party Central for them.

Excellent Tiz. Wish mine looked so good but you're very limited as to what you can do when you're on the roof of a 13 floor apartment and have floor loadings to consider. I stocked mine with koi and now they are too big and I'll have to consider releasing some to join others in the People's Square lake across the road from me.

Thanks for the positive comments!

A field down our lane has had its first cut.
Gloria
Now an Honorary Chief Engineer who'd be dangerous with a brain!!!
http://www.briercliffesociety.co.uk
http://www.lfhhs.org.uk
Top

At least 2 pairs of swallows in and out if the barn today, I'm worried that the 3 legged kitten will try climbing up onto the beams!
https://www.wunderground.com/personal-w ... UNITEDK203
Top

That Pond looks good Tiz, once the 'newness' has faded it will be even better. The straw does work, widely used strategy I hear.
Not heard a cuckoo in Barlick for a long time. Nice to hear you have swallows. There seem to be insects about....
Stanley Challenger Graham
Stanley's View
scg1936 at talktalk.net

Same here, Gloria. The hay was all lying out in the sun drying when we saw it.
A couple of rooks have found a trick using our bird bath. They're picking up stale bread from somewhere, flying to the bird bath, dunking the bread, then flying away to eat it or feed it to young!
Nullius in verba: On the word of no one (Motto of the Royal Society)
Top

Clever birds.
I saw a jackdaw trying to enter the closed louvres of the fan in the pigeon Club. Looks as though they managed to build a nest and the chicks must be dying inside, it had food in its beak. So sad.....
Stanley Challenger Graham
Stanley's View
scg1936 at talktalk.net

I'd no idea how much gravel to buy - guessed at four sacks, but cautiously ordered just two.
Big mistake.

I've spread them, and I think I'll need another three or even four to do a proper job.

P1000754.JPG
You do not have the required permissions to view the files attached to this post.
Born to be mild. . .
Top

Hard luck David.... You need Andrew Camarata. Look him up on Youtube. I watch all his videos and one of his specialities is spreading gravel on long driveways.... (LINK)
Those Siiver Birch look to be in good nick......
Stanley Challenger Graham
Stanley's View
scg1936 at talktalk.net

I was once staying will my pal in Canada, he and his neigbours were getting their drives resurfaced. The contractors turned up with enough equipment to build a motorway. A far cry from our wheelbarrow and rake approach.
Tripps, have you put down a membrane to stop the weeds growing through? and how are you going to deal with the leaves and other bits of debris that are attracted to gravel paths.
Top

There is one already, quite heavy duty, and until last years very wet Winter and Spring the weeds weren't much of a problem, but since then it's been a battle - which I've been losing.

In normal times a light rake is all that's needed for ongoing maintenance.

I watched the Canadian film - wow how much did that cost? Mine is £55 per bag delivered, and self laying removes the need for Pilates classes.

This is a good source for all things relating to such matters. Pavingexpert

Everyone like the birches. The lady that planted them all visited a while ago and was pleased how her plan had turned out.
Born to be mild. . .
Top

Got this today from our local 'peasant'.

Where are all the swallows


I've not been keeping up with recent reports on here - how are we doing?
Born to be mild. . .
Top

Peter Allen (now semi retired) on Radio Five Live interviewing Selina Scott who is now no longer in the media. I think she breeds sheep in Yorkshire somewhere. She has made reference to the situation above - "no swallows this year". She also says the crows are mobbing and eating eggs an chicks of lapwings, so that no chicks have survived this year.

Doe this fit with members' experience?
Born to be mild. . .
Top

Our biggest nest raiders are magpies. A murder also applies to crows. But I thought the old adage was.
If you see a Rook by itself its a Crow
If you see a bunch of Crows they are Rooks.

I know I'll get into trouble but those two posts remind me of the state of politics.....
Stanley Challenger Graham
Stanley's View
scg1936 at talktalk.net

We have swallows nesting this year and there seem to be more lapwings than ever before. I'm never aware of the chicks or young birds so it would be next year before anyone who isn't an avid birdwatcher would notice any fall in numbers. Ground nesting birds are threatened by so many things, mostly modern farming practices!
https://www.wunderground.com/personal-w ... UNITEDK203
Top

Another problem for wildlife is the loss of synchrony in timing between predator and prey due to climate change. Under stable climatic conditions, evolution has made sure that suitable prey appear in abundance at the same time as the predator has young to feed. Our turbulent and shifting climate is now disrupting this synchrony so that, for example, insects appear too early or late for insectivorous birds. Likewise synchrony is breaking down for migrating animals - they are arriving too early or too late and miss the the best time for food or for weather conditions.

Now, let's get back to wildlife!

Nullius in verba: On the word of no one (Motto of the Royal Society)
Top
Post Reply
989 posts