Our camping stuff has been delivered. Go Outdoors delivery first to the back via Hermes. 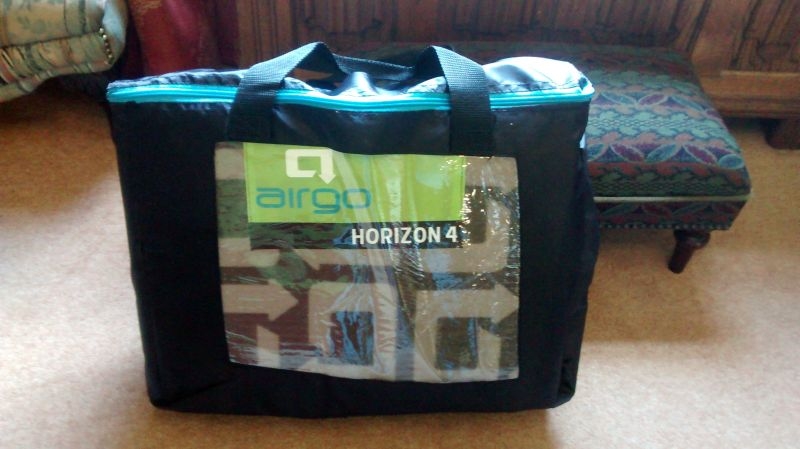 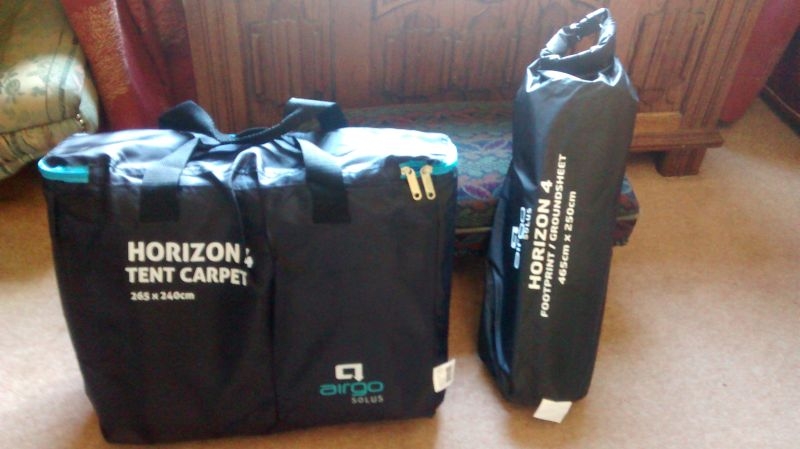 No sooner had I unpacked these than there was a knock on the front door. DHL on time within the delivery window according to their email.

Very well packed by the lads at Camping Resources: 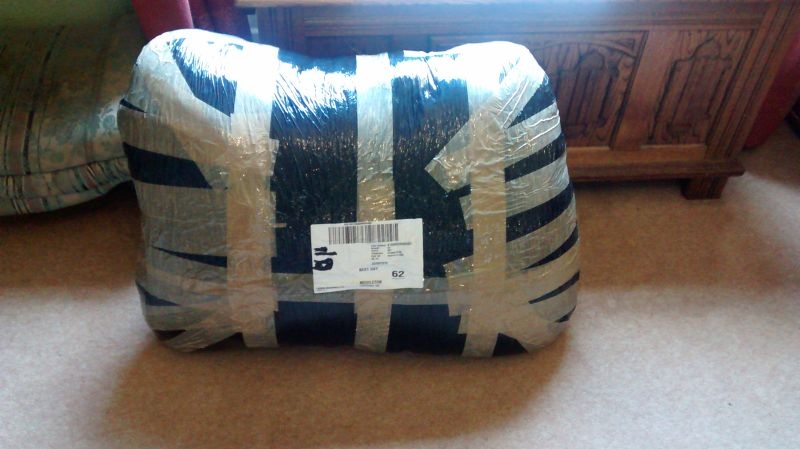 It was well wrapped in multiple layers of black clingfilm then secured with packing tape. Took a bit of getting into carefully with round nosed scissors so as not to nick any of the goodies inside. 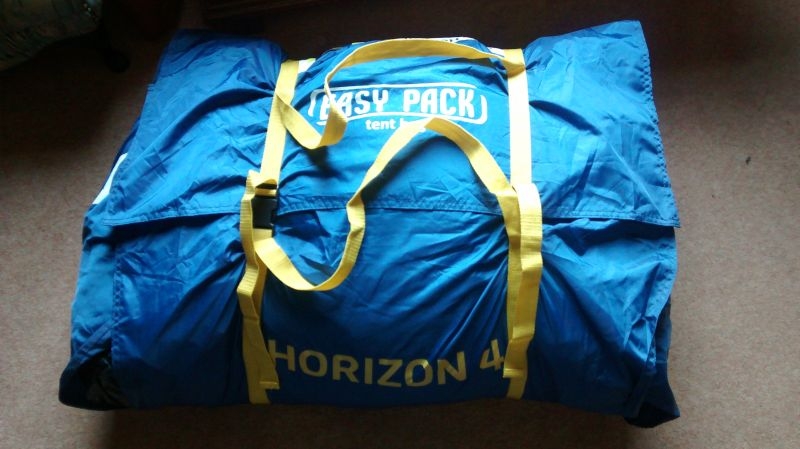 Nice sized bag, about three times the size of our existing poled tent. 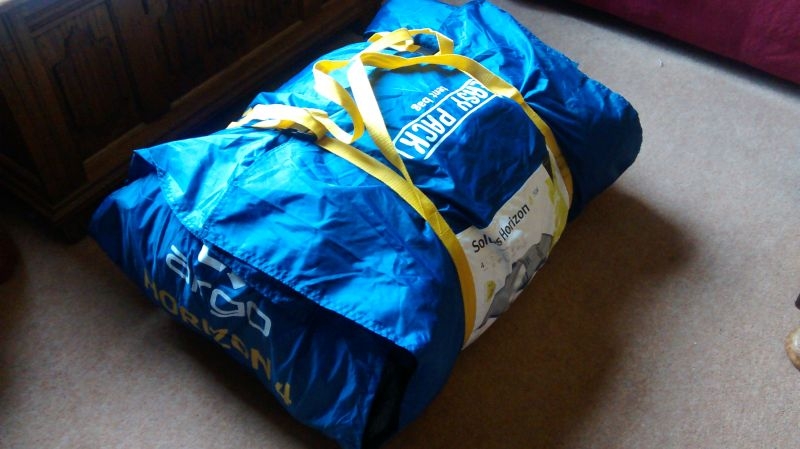 I think there may be room to fit the carpet and the footprint in here as well. 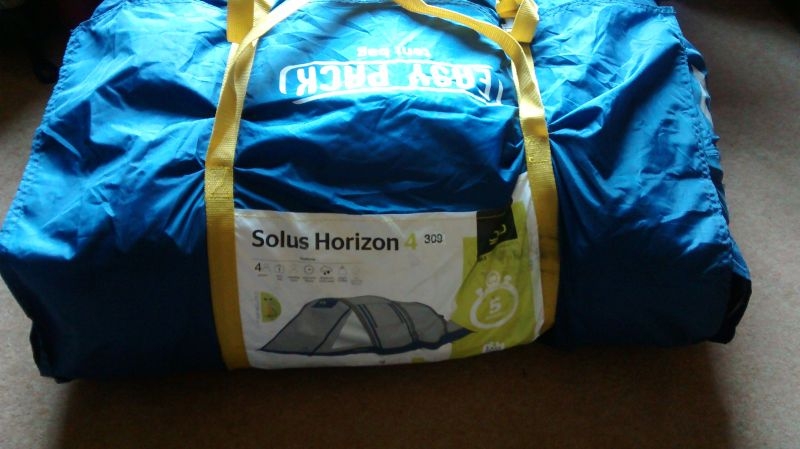 Just need a decent window of opportunity with a bit of dry weather to trial run it now before we use it in anger.

A far cry from the ex WD two man bivvie tents we had when we went camping with the choir after the war.....
Stanley Challenger Graham
Stanley's View
scg1936 at talktalk.net

Aye, my dad had an ex WD tent, white cotton canvas ridge tent, wooden poles and Hessian round the bottom at ground level. Tarpaulin for a groundsheet. I remember we pitched it up at Eric Parsons farm, Moor View, top of Esp Lane one Barlick holiday. I think I was about 5 years old. So it would be 1958 or 59. I remember mum and dad had camp beds, we three kids on the ground. No zips just ties on the door, draughty as hell. Particularly when we had a massive summer thunderstorm! Mum and our Jennifer, spooked and headed back down home in the thick of it. Dad, brother George and myself toughed it out, me and our kid were on a winner then as we got to share the other camp bed so were off the ground as the rain ran through the tent! All came good in the morning and for the next few days, I think I still have the paraffin Primus stove somewhere, I certainly still have the US Army mess tin, vivid memories of a belting trip.

A promised break in the weather and a fine spell this morning so we decided to test pitch the new tent. Loaded up the footprint and the tent and took it up Letcliffe. A bit of breeze up there but no real problem. We chose a spot next to one of the parking bays up there, checked the area for dog poo from the irresponsible that don't bother picking up. Looked good so we deployed the footprint and pegged it down.

It looked massive compared to our previous tent that we recently used, I suppose 4.65m x 2.5m is somewhat larger! deployed the tent on top and secured the flysheet at the corners. Opened up the airbeam flaps and screwed in the valves, attached by a chord on each beam, removed for deflation and maximum air expulsion when packing.

Started to assemble the pump, HP stirrup type. It has multiple adaptors for attaching to various bits of equipment. I fitted the adaptor that matched the valve. The pump end has an attachable 7psi cut off valve that is fitted to the pump first then the hose is connected to this. Here is where we hit a snag. The fittings at each end of the inflation tube are bayonet connectors and when I attached it at the pump end one of the bayonets on the female side broke when I rotated the pipe onto the adaptor.

I didn't use any excess force and the plastic mouldings are fairly substantial. I can only assume that sods law has dictated that I have got the one with a flaw in the moulding. Could not get an airtight seal to the pump so no alternative other than to repack and go home. Just in time as it turned out as it started to rain just as I was loading the repacked tent back in the car, one stroke of luck today

The tent itself, you would be hard pressed to tell it from a new one, it looks pristine from what we could tell with the canopy on the ground. I have contacted the suppliers and sent them the pictures attached here as evidence of failure. I will probably get a reply tomorrow sometime and we'll see what they say. 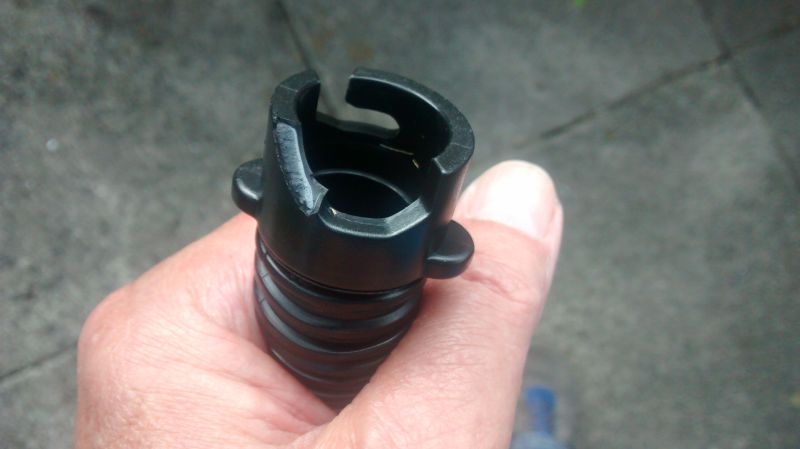 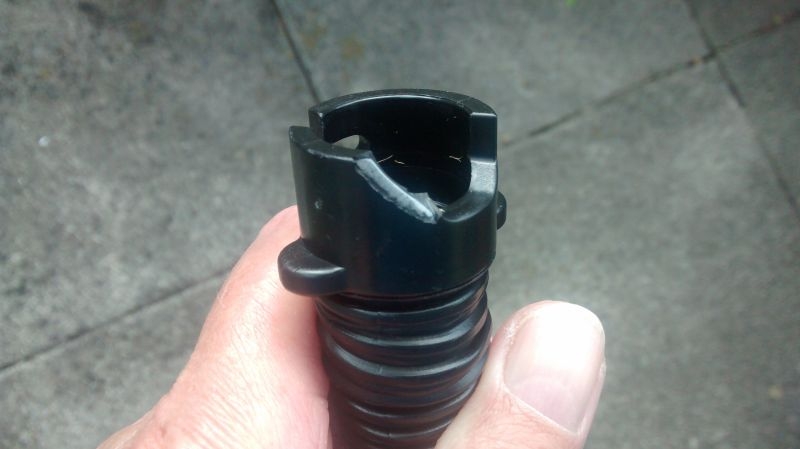 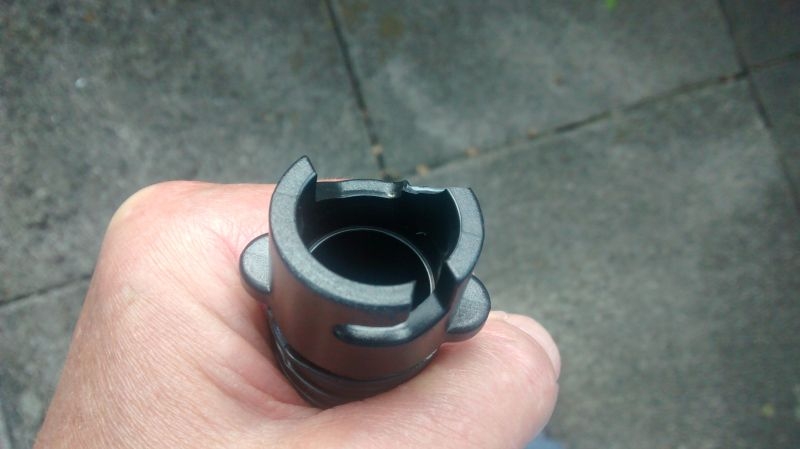 I don't think a bayonet attachment is a particularly good design although most of the other hand pumps use the same. I have seen an electric pump that uses screw threads at both ends of the pipe which to me in moulded plastic would seem a much sturdier connection. If they send me a replacement pipe, I think I will tape it up at the pump end until we have saved up for an electric one.

I didn't use any excess force and the plastic mouldings are fairly substantial. I can only assume that sods law has dictated that I have got the one with a flaw in the moulding.

This sort of failure seems to be frequent now. Perhaps due to cost-cutting or lack of quality control. For example, Mrs Tiz bought a new pair of secateurs last week. After opening the pack and trying them a screw fell out of the handle, one of two screws that holds in the blade on that side. When I tried to screw it back in it wouldn't grip at all and fell out immediately. In the end I found a slightly bigger screw that did the job. `They don't make `em like they used to!'

Indeed Tiz, most of the stuff is made in China and I have seen at least three badged as other makers pumps exactly the same as the one with this tent. I think that in the real world there is probably one manufacturing complex in China that is now producing most of the tents and the accessories to go with them. There will be exceptions of course.

We had a bit of fun yesterday folding the tent back up small enough so that it would go back in the bag.

This will no doubt improve with practice.

Not a bag actually, no zips its a fold round, strap and tighten job which is essentially a cross of rip stop material with sewn in compression straps. You put the tent in the centre, fold up the ends and tighten with two nylon webbing straps then repeat overlapping the sides. Carry handle for the pack is integrated into the webbing.
Ian
Top

Just got a reply from Rob at Camping Resources. Very apologetic and they are sending out a replacement.

When it comes I think I will make the pipe connection to the pump permanent with PTFE tape and then overwrap with insulation tape. Or I might have some heat shrink wrap of big enough diameter that would make a better job. You can swap the pipe to another connector on the pump for deflation but we don't really need this option as the valves on the airbeams are removable for maximum deflation. I will leave the other end as it is for the interchangeable adaptors.
Ian
Top

DHL should have delivered yesterday but my replacement was marked as collected from the supplier but delayed at their depot on their website. It turned up today just before lunch. Not just a replacement pipe as expected but a complete new pump, pipe, adaptors and pressure relief valve. Excellent service from the eBay supplier. I will give some very positive feedback.

I have modified the pipe by fixing the pressure valve to the pipe with self amalgamating tape overlapped with tightly wrapped insulation tape. I didn't have any heat shrink with a suitable diameter. It should be serviceable until we get a replacement powered pump.
Ian
Top

Went to Aldi yesterday and found this at a bargain price of £14.95! Not damaged or a customer return as they had a few of them. 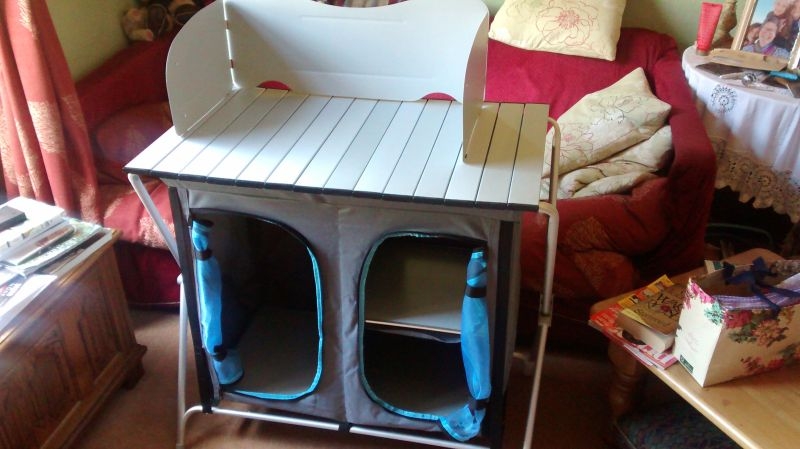 This camp kitchen is exactly the same as other badged models sold by Outwell and other well known camping brands. They normally retail between £50 - £100. I remember seeing this on the Aldi website for £49.95 earlier in the summer. Heavy rip stop material larder with three internal shelves and zipped fly screen front access. Folding aluminium lath worktop with a windbreak /splash screen for the gas cooker hob and grill with an access point at the back for the gas pipe. It is supplied with a zipped case that it flat packs into for storage and transport

Definitely bargain of the month, substantial construction and a nice addition to the camping equipment.

Camping has obviously changed since me and a pal camped for a week up on Glyder Fawr and ended up with only Corn Flakes and Ryvita to eat. Halfway through the week we walked the length of the ridge to Capel Curig to get supplies from the one shop. It turned out to be early closing day!

1969, I survived for a week at Cayton Bay near Scarborough on 8 rashers of bacon, one Wonderloaf (with a bit of blue mould round the edges) and a jar of instant coffee. I had some butter, sugar and Marvel dried milk.

Are we getting into glamping?
Stanley Challenger Graham
Stanley's View
scg1936 at talktalk.net

Not really Stanley, glamping is considered to be the pre pitched larger tents with proper beds heating, lighting etc or the hobbit type wooden huts (pods) that you find on many camp sites nowadays. Drive, park, occupy, that's glamping. We are assembling kit that is more practical for our situation.

Remember the bloke who was selling the Horizon 4 but on a collect only? I offered to buy it if he would use the £9.99 delivery option I suggested. Well he hasn't sold it, auction has ended. He is £250.00 worse off and he still has a tent to sell. He has re-listed it now with a finish date of 13th October on the same terms.

Our last trip to Aldi netted us another green rubber "grass" doormat for outside the tent, reduced to 99p, winner

We are double doormat campers now, but still not glamping.